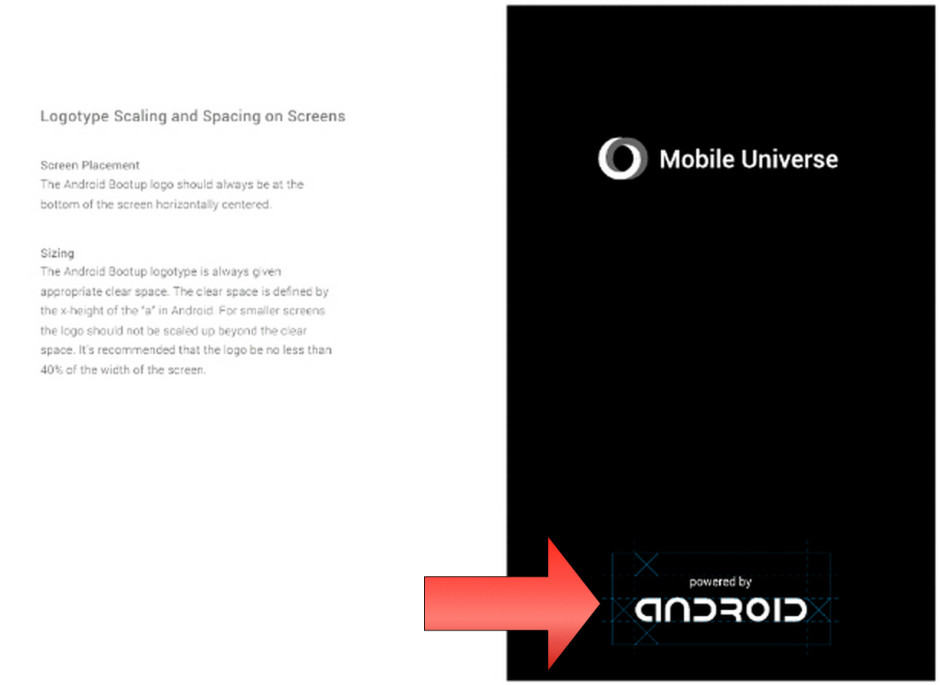 Google recently started requiring Android handset and tablet makers to add a very specific “Powered by Android” graphic to the boot animation when you power up an Android phone. It’s part of the revised Google Mobile Services agreement for new Android phones.

The penalty for handset makers’ non-compliance is banishment from access to the Play Store by users of those devices.

The move is no doubt intended to raise user awareness about Android and brand the platform.

Unfortunately, it could backfire. Here’s why.

What Is the ‘Powered By Android’ Program?

The news was first reported on the Geek.com site. Google is doing something that at first glance looks like the on-screen equivalent of those unsightly and sloppily applied stickers you find on Windows laptops that say “Intel Inside,” “Made for Windows 8” or whatever. It’s actually a little closer to the Windows boot-up screen that displays Windows branding.

In fact, it’s unlike both of them.

The stickers are optional for Windows laptop OEMs, but companies like Microsoft, Intel and graphics card vendors pay OEMs to place those stickers there. So it’s an easy source of revenue for the laptop maker.

The Windows splash screen is placed there by Microsoft as an un-removable part of the operating system, which the OEMs pay for.

In the case of Google’s “Powered By Android” program, there is no payment of actual money in either direction, nor is it baked into the OS. It’s something Google wants OEMs to insert into the boot-up screen in exchange for access to the Play Store.

The HTC One M8 and Samsung Galaxy S5 already show the logo underneath the logo for each company. Future phones will no doubt display the logo as well.

Why Is Google Doing the ‘Powered By Android’ Program?

Google has been losing control of Android branding. Even some of the biggest handset makers launch their big, flagship products without even mentioning the A-word.

Google is busting their butts and spending a fortune to cultivate the Android platform, then handset makers are hogging all the credit.

Google is essentially confronting the universal conflict that naturally occurs when different companies contribute to the totality of a product. How do do you brand it? When you buy a Samsung phone running Android, is it a Samsung phone or an Android phone? Samsung and Google each benefit when the branding is their own.

Google is a business. It tends to launch things that make money, either now or in the future. And it tends to cancel things that lose money.

Android is viewed as a way for Google to make money. It does this by encouraging its adoption by as many people as possible, then monetizing that use through the Play Store, and also through mobile advertising on Google Search and other Google products.

Companies that use Android vary in terms of their participation in the Play Store, and their motives for doing so.

When handset makers take advantage of the Android Open Source Project, and build phones that do not run “official” versions of Android, Google benefits to some degree because it boosts Android market share and theoretically encourages developers to build Android apps.

But Google’s business model is also harmed to the extent that Google is probably not making much money from the users of these phones.

Unfortunately, it appears to be going in the wrong direction for Google.

In fact, the market share for unofficial, “forked” or non Play Store versions of Android is actually higher than Apple’s market share for the iPhone, mainly because of trends in China and India.

Enders Analysis analyst Benedict Evans pointed out a few months ago that only 5.6% of all mobile apps that exist on the Android phones of Chinese users were downloaded from Google’s Play store. About 72.6% were downloaded from app stores that Google has no involvement in or control over.

It’s not just China. Amazon has built its entire version of Android around avoiding anything Google makes. More than that, Amazon replaces Google products and services with its own — it uses its own Silk browser, it’s only downloadable movies, music and books over Google’s, and has its own Amazon alternative to the Google Play Store.

The new Nokia X has no default access — and Nokia has no desire for users to access — the Google Play store.

Besides getting no income from the fastest growing segment of Android, Google has another problem: About 97 percent — of all mobile malware exists on the Android platform.

That’s 100% with a rounding error. Globally speaking, mobile malware is a predominately Android issue, and malware is one of the core attributes of Android globally — one of the few things that set the platform apart from iOS, BlackBerry and Windows Phone. And that’s not good!

One major reason for this is that so many handset makers aren’t using the Play Store.

You can see where this is going.

Yes, Android isn’t getting enough branding attention on phones. But that’s the least of Google’s problems.

Google needs to do everything it can to incentivize OEMs to literally get with the program and embrace the official version of Android and use the Google Play Store.

This new requirement is a disincentive to do that.

But there are many, many companies around the world who are ON the fence, and could go either way.

The “Powered By Android” program is a needless nudge that will probably push some of those on-the-fence companies to the wrong side of the fence.

Either way, simply requiring the logo without compensation seems to me a risky proposition, given that it incentivizes OEMs to embrace non-official versions of Android.