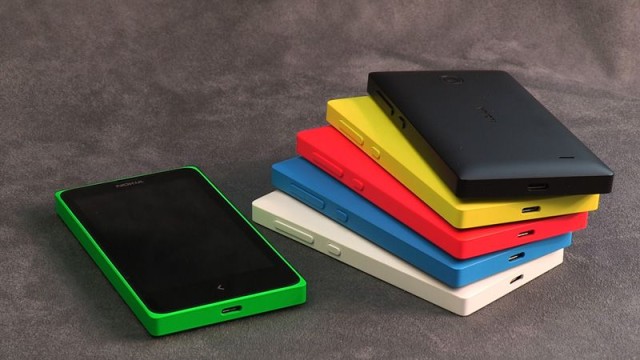 We were all expecting Nokia to announce its first Android-powered smartphone here at MWC, but what we actually got was three new handsets all running the Finnish firm’s new take on Android. Called the Nokia X, the Nokia X+, and the Nokia XL, the trio offer “phones for all” — and promise to bridge the game between Nokia’s entry-level Asha lineup, and its flagship Lumia family. The Nokia X is the handset we’ve all been hearing about for several months — and it’s everything the leaks said it would be. It’ll cost just €89 in Europe, and it features a 4-inch WVGA display, a 1GHz dual-core Snapdragon S4 processor, 4GB of internal storage, and a 3-megapixel rear-facing camera.

The Nokia X+ is just €10 more than the Nokia X at €99, so as you might expect, it’s not that different. In fact, it looks exactly the same, and has almost exactly the same internals — but its 768MB of RAM means it should be snappier when running apps and games. The Nokia XL is for those who like larger smartphones, but other than its larger display, it’s not too dissimilar to the Nokia X+. It has the same resolution, the same processor, and the same RAM — but it does have a slightly better 5-megapixel rear-facing camera with LED flash. It also costs more at €109.

All three of Nokia’s new handsets run a heavily modified version of Android, with its own Nokia app market. Apps from lots of big-name developers such as Facebook and Skype are already there, and Nokia says users will be able to side-load Android apps from third-party sources as well.

Unlike other Android devices, Nokia’s will use Microsoft services like SkyDrive instead of Google’s.

The Nokia X is available immediately, while the Nokia X+ and the Nokia XL will be available during the second quarter of 2014.