When you buy a smartphone wallet case, the chances are you’re going to have to make some cutbacks — because the vast majority of them only carry a small number of cards. But that’s not the case with the Finn wallet from WaterField Designs, which has plenty of space for your phone and all the cards and cash you can carry.

Finn’s available in four different sizes: the size 25 model is designed to be a wallet only, but the other three — size 27, size 42, and size 69 — are designed to carry your smartphone as well. Of course, the larger the Finn, the bigger the smartphone you can stash into it (and the more it’ll cost you).

I’ve been reviewing the size 25 and the size 69, which measures 5.5 inches by 3.3 inches, and is designed to carry an HTC One or a Galaxy S4, according to WaterField’s website — but it’s compatible with a whole bunch of other smartphones, too. I’ve mostly been using mine with a Nexus 5, but I’ve used HTC, Samsung, and BlackBerry handsets with it, too.

WaterField calls Finn “the best wallet ever,” so let’s see if it lives up to those claims.

The best thing about Finn is that it’s incredibly spacious, so it’s ideal for those with bulging billfolds who somehow manage to collect handfuls of cards they refuse to live without. And even after you’ve crammed in as much plastic as you can, there’s still space for your phone and some cash. 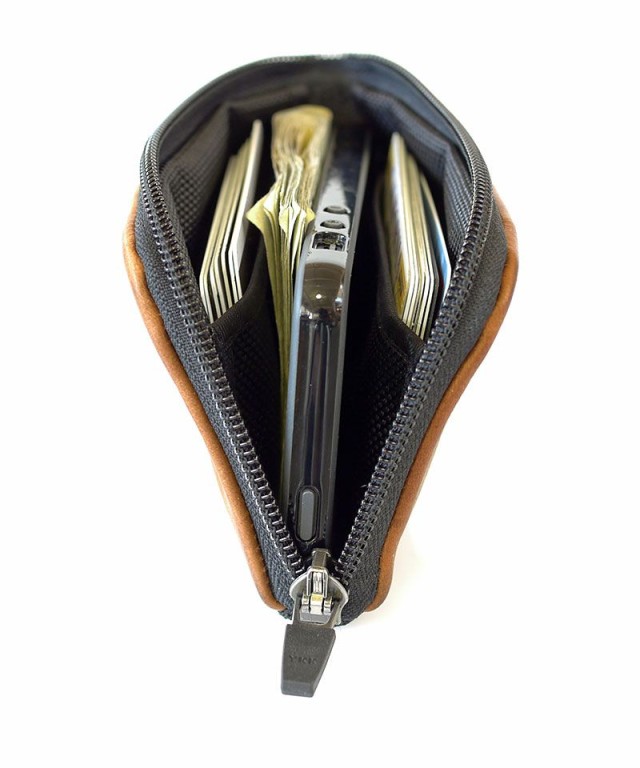 The more you put into Finn, the bigger it gets, but its thin profile helps it fill out without getting too bulky. I filled the size 25 wallet with every credit card my wife and I had in our possession, plus a bunch of coins, and it was still thinner than the trifold leather wallet I was using before.

With the size 69 wallet, I had more than enough room for my smartphone as well. In fact, my Nexus 5 fits in there quite easily even when it’s inside a case.

Of course, if you have a smaller smartphone, such as an iPhone, a wallet this size isn’t necessary, so you’ll want to be careful which model you choose. You might think about choosing a larger wallet if you have lots or cards, but you probably won’t need to, and you’ll appreciate the smaller footprint of the smaller models.

The great thing about Finn is that, unlike other smartphone wallets, it’s still useful even if you don’t want to put your smartphone in it. You can just pull your device out and use it as a regular wallet, and there’s no gaping hole that’s good for nothing else.

The other handy thing about Finn is its zipper. You don’t have to worry about losing anything you stash in it because there’s no chance of it ever falling out. I’ve actually started throwing SIM eject tools and microSD cards in mine to prevent them from getting lost in the bottom of my bag.

This is when Finn is most useful. The larger models are too big to carry in your pocket, but if you always carry a bag, they’re a great way to keep all of your small and important things secure and easy to get to.

If you don’t carry a bag, there’s a chance Finn will be too big for you — depending on how big your smartphone is. While I can imagine the smaller iPhone-tailored model might well fit in a loose pocket (I can’t be certain because I haven’t reviewed that one), the larger one is certainly too big when your smartphone’s inside it — unless you wear baggy cargo pants.

Another downside is that smartphone protection really isn’t one of Finn’s priorities. It’s not all that soft on the inside, and there’s no separate change pocket, so if you put coins and other small objects in there, they’ll be rubbing up against your handset. That’s a problem if it’s not in another case.

There’s no zipper guard of any kind, either, so if you’re not careful, it’ll run alongside the sides of your smartphone when you’re opening and closing it. And finally, Finn will muffle your smartphone’s speaker significantly, so even at full volume, you may not be able to hear calls and notifications when it’s in your pocket.

Despite its downsides, I couldn’t help but like Finn. It’s a simple wallet that’ll carry more than most people will ever need to put in their pockets; you can literally throw almost anything small into it and you know it’ll be safe and close by when you need it. What’s more, its smartphone protection is completely optional.

Finn is especially useful for those who carry a bag or a rucksack, because it makes your smartphone and credit cards easy to find. It’s also very nicely priced — it starts at $39 and goes up to $49 — which is a lot cheaper than most good smartphone wallets.