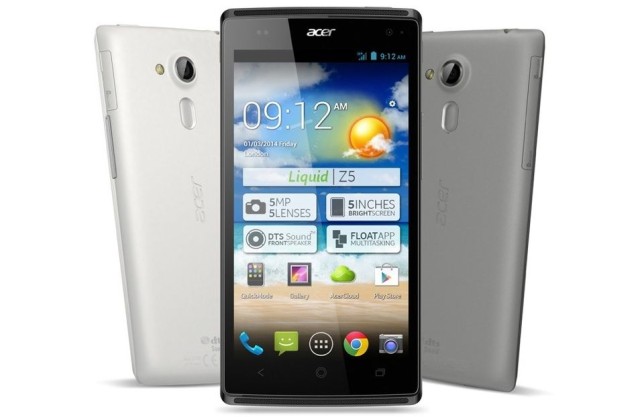 Acer is the latest company to venture into the ultra-affordable smartphone market with its latest budget-friendly handset, the Liquid Z5. According to the manufacturer, the device will go on sale in mid-January with a suggested retail price tag of $230, making it a bit more expensive than Motorola’s budget handset, which you can grab for $170.

Unlike the Moto G, the Z5 doesn’t provide much bang for your buck, featuring a 5-inch TFT capacitive touchscreen with a slightly depressing resolution of 480 x 854 pixels, a sluggish MediaTek MT6572 chipset powered by two 1.3GHz CPU’s, a measly 512MB of RAM, a Mali-400 GPU, 4GB of internal flash memory (expandable up to 32GB via microSD) and, most attractive of all, a 2,000 mAh user removable Li-Ion battery.

The Taiwanese multinational hardware and electronics corporation insists that the main selling point of this smartphone in particular is its “best-in class” 5-megapixel rear-facing camera, which comes with “a 5 elements f2.4 lens”, together with a backside illuminated sensor that sports a 1.4um x 1.4um pixel size for “better quality and less graining while in low light environments.”

If you like the sound of the Acer Liquid Z5, you’ll be able to pick one up in the U.K., France, Germany, Netherlands, Belgium, Spain, Portugal and Ukraine straight after CES. However, if you’re lucky enough to be attending the Consumer Electronics Show in Vegas, you may want to swing over to Acer’s booth in order to try it out.