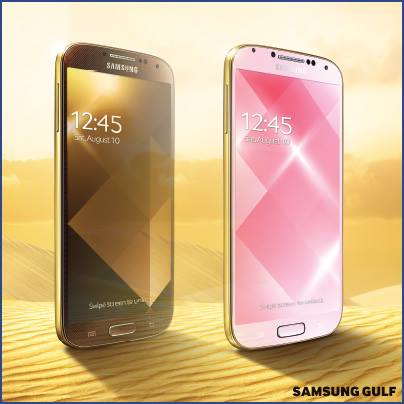 Samsung has traditionally offered its smartphones in a whole variety of colors, but one we rarely see is gold — until Apple announces a gold smartphone. Just two weeks after the Cupertino company unveiled the gold iPhone 5s, Samsung has begun showcasing its gold Galaxy S4 in the United Arab Emirates.

Does this company have any shame?

There are actually two gold Galaxy S4 variants; one comes with a brown display, while the other has a pink display. Samsung has been parading the devices on its social media accounts in the United Arab Emirates, but it is yet to announce them in the U.S. or Europe.

There’s a chance the device won’t make it to this side of the world, but given the incredible demand for the gold iPhone 5s, Samsung may find it hard not to make these handsets available globally. After all, that’s undoubtedly what inspired the Korean company to make this device.