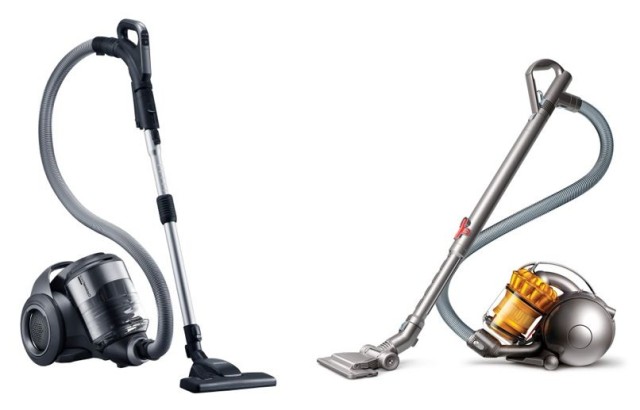 Samsung has earned quite a name for itself copying Apple’s most successful products, but it’s not only in smartphones, tablets, computers, and accessories where the South Korean company sources its inspiration from its closest rivals. British manufacturer Dyson is suing Samsung for allegedly ripping off one of its inventions in a new vacuum cleaner that was unveiled at IFA in Berlin last week.

According to Dyson, Samsung’s new Motion Sync vacuum cleaner infringes its patent on a steering mechanism for cylinder cleaners. The company has started legal proceedings in the High Court of England, but it’s currently unclear whether it wishes to block sales of the vacuum completely, or charge Samsung a fee to license the technology.

“This looks like a cynical rip-off,” Sir James Dyson, the company’s founder, told BBC News. “Samsung has many patent lawyers so I find it hard not to believe that this is a deliberate or utterly reckless infringement of our patent.”

Based on Samsung’s history, there’s a chance it is deliberate. The Galaxy smartphone maker has already been found guilty of copying Apple’s iPhone and iPad, and Apple’s influence on its products can be found throughout its entire mobile lineup — from tablets and smartphones to notebook computers and accessories.

Last August, Samsung was ordered to pay Apple $1.05 billion for infringing its patents with a whole range of smartphones and tablets — though the fine was later reduced and is now set to be recalculated. The company has even had brushes with Dyson before; back in 2009 it was ordered to pay £600,000 after it attempted to patent Dyson’s “triple-cyclone” suction technology.

“We have been forced to issue proceedings in the English High Court, but I would much rather invest in research to develop new technology than have to sue,” Sir James Dyson added.

The BBC reports that Dyson first filed a patent for its steering mechanism, which allows the vacuum to “spin” quickly from one direction to another, back in 2009. It took three years for the company to develop it, and the mechanism has since been used in two Dyson vacuum cleaners.