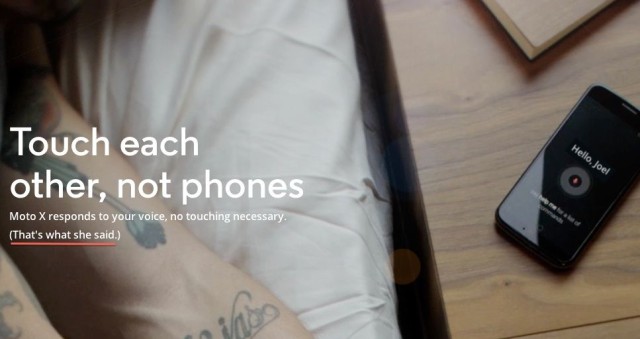 Not only does Motorola’s new Moto X come with neat customization options, attractive specs and 24 hours of battery life, but you also get a shit ton of penis jokes and sexual innuendos to go with it.

Motorola just launched a Moto X section on its website. There are plenty of details on the flagship phone’s flashy new features, but apparently the marketing team decided the best way to sell the new smartphone is to sprinkle in a bunch of dumb gags like the one posted above.

And if you don’t make it to the Moto X webpage, don’t worry — Motorola’s got you covered with some fresh dick jokes over on Twitter. 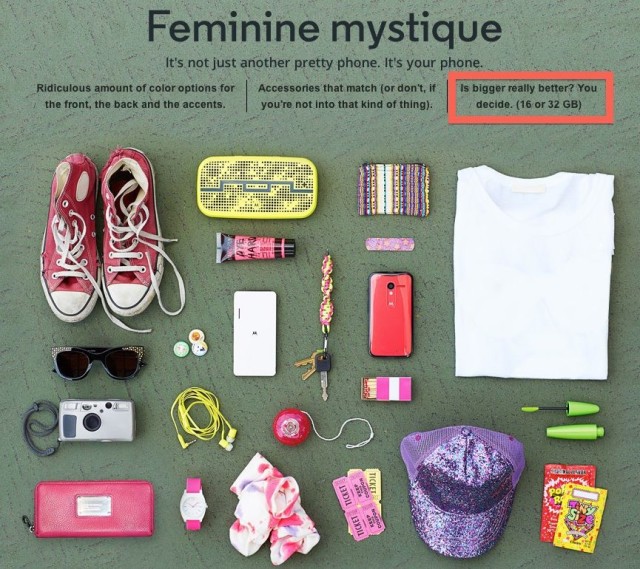 Update: Looks like Motorola has already backtracked on the sexual innuendo campaign. The ‘Feminine mystique’ section has been changed to read “Play Goldilocks and choose the right size for you,” and the “that’s what she said” line has been deleted from another.

The company also is covering its tracks on Twitter and removed a tweet that read “Yep. We’ve got wood. And 2K+ other combos. Designed by you. Assembled in the USA. #MeetMotoX” accompanied with a picture of a woodgrain Moto X case.

We’ve reached out to Motorola Mobility for comment on its infatuation with phallic references but have not received a reply yet.