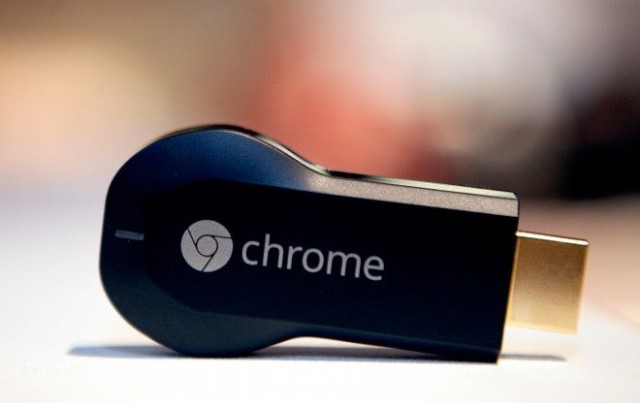 Google has revealed its latest foray into TV hardware: Chromecast, a 2-inch dongle you plug into your TV’s HDMI port to stream cloud-based video from your smartphone, tablet or PC.

The tiny $35 piece of hardware, unveiled today at an Android press event in San Francisco, runs a simplified version of Chrome and is powered via USB. Chromecast support has already been built into apps like Netflix and YouTube, but Google is also releasing a Google Cast SDK that will allow developers to build Chromecast support directly into their apps.

Rather than streaming video directly from your device to your TV, Chromecast works with your device to pull info from the cloud and play it on your TV. Basically your smartphone is just used to tell the dongle which video file on the net it should play, rather than merely mirroring your screen like Apple’s AirPlay solution.

“Once Chromecast is plugged in, you just go to YouTube on your smartphone,” Google said. “You’ll see the cast button in your UI and you press it. Chromecast will pull the info you requested from the cloud and play it on your TV.”

One of the benefits of Chromecast’s video-streaming method is that users can still jump into other apps while video is being pushed to a TV screen. Users can also control TV playback and audio directly from their mobile devices. You can even stop watching a Netflix movie on one screen and then pick up right where you left off on your tablet.

Video isn’t the only type of media Chromecast is good for, though. Google also revealed a beta feature for Chromecast that lets you project a Google Chrome tab to your TV from a laptop running Windows or OS X. Users can share family photos or read the news right from your TV.

Chromecast is launching with a limited number of content partners, but Google says it’s working with companies like Pandora to bring Chromecast into more apps. Tech specs weren’t mentioned but you can pick up a Chromecast today from Google Play or wait until Best Buy stores get it in stock on July 28.