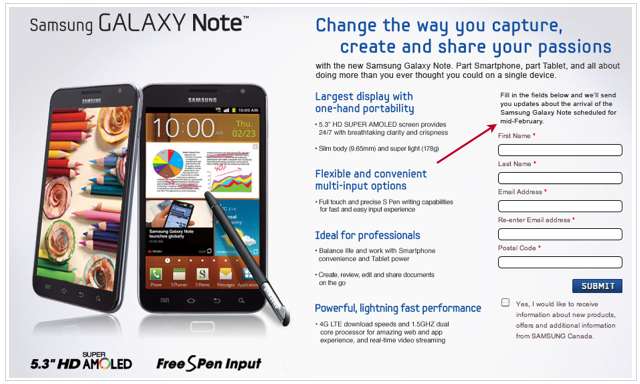 The behemoth “not a phone, not a tablet” Galaxy Note will be coming to Canada soon, and already has its own landing page where you can sign up for updates on its arrival. This thing has definitely been making the rounds as of late. First we heard about it landing on AT&T, then the possibility of it coming to Verizon and Sprint, and now our brethren to the north are getting it. It won’t be long before we find out just where a 5.3″ device fits into this mobile ecosystem, and whether or not the demand for one will be as big as the hands needed to hold it.

You can head on over to Samsung’s landing page to fill out a quick form to remain updated on the status of the Note’s arrival to Canadian carriers, which is slated for mid-February. If you need a refresher on this beast, here’s the spec list for the Samsung Galaxy Note: