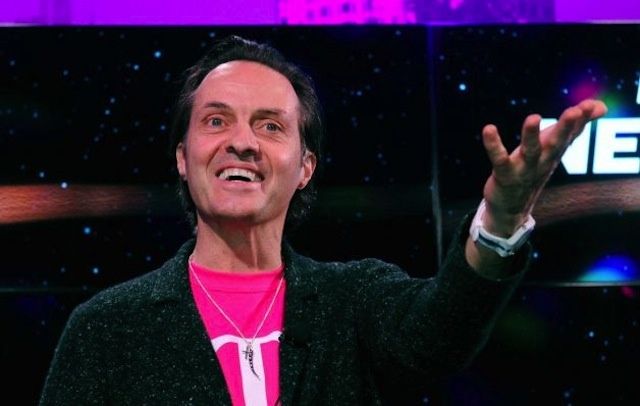 T-Mobile CEO John Legere kicked off the company’s press event in New York City today with an aggressive yet entertaining onslaught against rival carriers. He called for the likes of AT&T, Verizon, and Sprint to “stop the bullshit” with traditional subsidy models, which T-Mobile has now abandoned in favor of its new “Uncarrier” plans.

“Carriers are really nice to you… once every 23 months,” Legere quipped during his blunt presentation. “This is the biggest crock of shit in my life. Do you have any idea how much you’re paying?”

Legere slammed T-Mobile’s competitors for locking customers into old-fashioned two-year agreement when they take out new cellphone plans, which is exactly what T-Mobile’s new Uncarrier initiative is built to avoid. Rather than tying customers down, it gives them the option to pay for their new device outright, or spread the cost over 20 months.

“Customers don’t need another AT&T,” he said. “Customers need someone to stop acting like AT&T.”

“If you come to T-Mobile, you’ve signed your last contract.”

Legere is confident that T-Mobile’s new approach is the best one, and he’s clearly doing all he can to communicate that to consumers. This isn’t just waffle that’s been dreamt up by a marketing guru, either. T-Mobile’s new Uncarrier plans really do give you great value for money.