The Google+ apps for Android and iOS have today been updated with a number of new features and improvements. Both apps get user interface tweaks and the ability to re-share posts to communities, while iOS users will also see a number of Snapseed filters that will allow them to enhance their photos before they post them.

The updates certainly appear to favor iOS users today, with the biggest changes happening on iPhone and iPad. In addition to new photo editing features, including the Snapseed filters mentioned above, the iOS app also has new profile designs, a new notifications tray, a better setup flow for new users, and the ability to control the volume of posts in your stream. 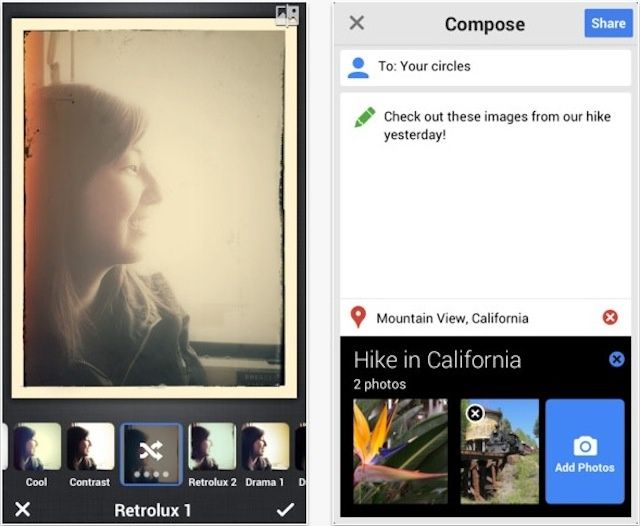 The full release notes for iOS can be seen below:

– New photo editing features: add filters, rotate, and crop
– New profile design
– New notifications tray
– New set-up flow for new users
– Control the volume of posts that you see in your stream from individual circles/communities
– Filter search results by best or most recent
– Tell your friends about a community (by sharing it or sending an invitation)
– Re-share posts to communities
– Display counts for unread messages in your communities
– Additional community moderation features

If you’re an Android user, you’ll see a lot of the same features listed above, but you won’t see the photo editing options. There’s another feature exclusive to Android, however, which is the ability to share your current location on your profile. If you choose to use this, you can control who sees it in the app’s settings menu.

The Android release notes are below:

The latest Google+ releases for Android and iOS can be downloaded from the App Store and Google Play now.