Laaaaaaaaaaadies and Gentlemen, welcome to Friday Night Fights, a new series of weekly deathmatches between two no-mercy brawlers who will fight to the death — or at least agree to disagree — about which is better: Apple or Google, iOS or Android?

After this week’s topic, someone’s going to be spitting teeth. Our question: What’s Better? The iPhone’s 3.5-Inch Display, or Android’s 4+ Inch Superphones?

Place your bets, gentlemen! This is going be a bloody one.

One of the major advantages to Android and their open-source environment is the fact that you can find it on just about any hardware (which is also an argument against Android). Big screens, small screens, and everything in-between — which brings us to our next topic: Screen Size. Screen size, in my opinion, really comes down to personal choice. Whether or not a larger or smaller screen size is best, is really based on an individual’s needs and personal preference. This argument transcends smartphone boundaries and can be found in almost every area that involves a screen, e.g. computer screens, TV screens. etc. With that being said, I think having multiple options is much better than a one-size-fits-all approach. Can you accomplish most necessary tasks on Apple’s 3.5″ iPhone screen — sure. Is it a more enjoyable experience playing a FPS game on a 4.65″ screen with more room for on-screen controls — in my opinion, yes.

I’ll start by saying when I first switched over to 3.5″ – 3.7″ screens, I thought that was going to be too big. Fast forward a couple of years, and I’m now finding those same devices to be too small. Seems strange but it’s the truth (at least for me). I now have a Galaxy Nexus with a 4.65″ screen and I find it to be the most beautiful and perfect size I’ve yet to use. Is 4.65″ too big for some people — yes. Is it perfect for me — oh, yea!

Having a plethora of choices when it comes to screen size is a great advantage of Android. We are all built differently and what may fit you, may not fit me. You may not have any interest in gaming or watching HD movies and therefore have absolutely no desire for a larger screen, but at least with Android, you have a choice. Phones have evolved into personal computers, they are now mobile TVs, miniature gaming consoles, and full on photo and video cameras. Having options when it comes to the size of the screen on which you will experience these tasks, is as personal and unique of a choice as the individual using them. Why limit yourself to once choice? With that mentality, you mine as well live in a world with one phone, one screen size, one look — you mine as well own an Apple.

I guess what I’m saying is: I’m pro choice. And thanks to Android, I have one.

Generally speaking, when iPhone lovers debate this issue, they do so by just by hotlinking this image which was put together last year by designer Dustin Curtis to show why Apple chose a 3.5-inch display over a 4-inch one: 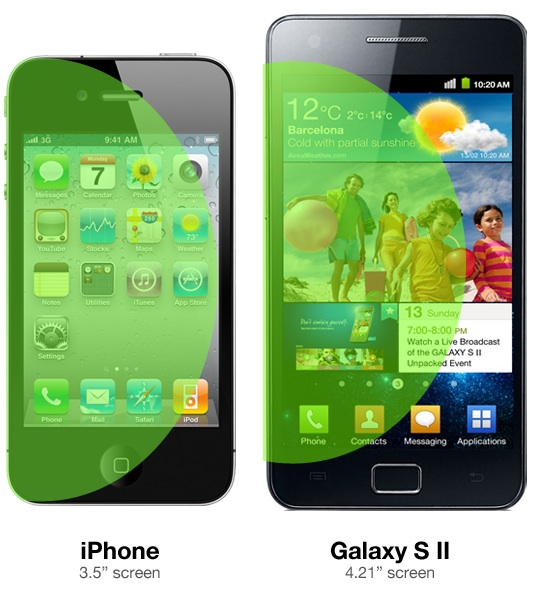 It’s a great image that just says loads about Apple’s attention to detail. As you can see, three-and-a-half inches is the sweet spot for allowing most people to text with a single hand on their touchscreen phone, represented by the green zone on each smartphone. Go above four inches, and you can no longer do that: you have to text on your phone with two hands, Blackberry-style.

It’s a compelling graphic, no doubt. Note that an iPhone user still has the option of texting with two hands, where as the owner of, say, a Galaxy Nexus doesn’t have the option at all.

And, of course, this sweet spot doesn’t just apply to texting. An iPhone user can access any onscreen element with one hand. He can dial a number with one hand, he can play a game with one hand, and so on. On a greater than 4-inch touchscreen, you need two hands if you want to access more than around 70% of the phone’s UI.

Apple doesn’t just arbitrarily pick things like display sizes. This 3.5-inch sweet spot is one that was settled upon by Apple’s engineers after what was probably months of extensive testing. It’s a choice that not only makes the iPhone’s UI more accessible and easier to use for the vast majority of people, but it also makes the iPhone much more friendly to the disabled, the elderly, people who have limited mobility, and so on.

How does someone in a cast, or who can’t move their arm because of a stroke use a Galaxy Nexus? With extraordinary difficulty and great frustration, that’s how.

But let’s not end the debate here. Let’s consider a couple other points.

First of all, the number of different display sizes available on the Android platform is just another element that exacerbates the operating system’s notorious fragmentation problems. Because display sizes can be all over the place, app developers need to constantly be adjusting their apps to play nice with the latest bizarro display. It’s a lot of work, and part of what makes Android a much less friendly development platform for programmers.

But here’s the other thing. Let’s not forget the real reason so many device makers are embracing larger screen devices: by expanding the dimensions of the device, they can cram in more battery, which allows them to mitigate the suckiness of Android’s truly awful power management issues.

• Talk Time: The Galaxy Nexus gets 8 hours and 23 minutes of 3G talk time to the iPhone 4S’s 7hours and 41 minutes. That’s roughly 8.5% more talk time for the Galaxy Nexus, for a 20% increase in battery size.

• Web Browsing: The Galaxy Nexus gets just 3 hours and 1 minute of web browsing over 3G, to the iPhone 4S’s 6 hours and 46 minutes. This is despite a larger battery.

• Video Playback: Again, the iPhone 4S is on top, managing 9 hours and 24 minutes of video playback to the Galaxy Nexus’s 6 hours and 32 minutes.

Those are terrible results, and keep in mind that right now, the Galaxy Nexus is being positioned as the best smartphone on the Android platform, the one all other Android phones should be measured up to. According to our calculations, though, if the Galaxy Nexus had a display the same size as an iPhone 4S’s, it would manage a mere 6.8 hours of of talk time, 2.5 hours of web browsing or 2.9 hours of video playback on a single charge. And keep in mind that this is just out-of-the-box: install any number of apps on your Android phone that suck down data in the background and these results would get even lower. Madness.

Vincent claims that the larger displays on Android are a choice. I say they’re a crutch. They allow carriers to cram larger batteries into their devices to hide the fact that the Android platform’s power management is deeply crippled compared to iOS’s. And even when these larger devices do match or even exceed the iPhone 4S in battery life, they do so at the expense of usability and convenience for the vast majority of users… all the while helping fragment Android even more than it is, guaranteeing that the best app developers focus on iOS as a matter of course.

What do you think? Is Apple right in offering just one screen size choice for iPhone’s, or are Android makers just deluding themselves? Who do you think made the better argument? Let us know your thoughts in the comments!