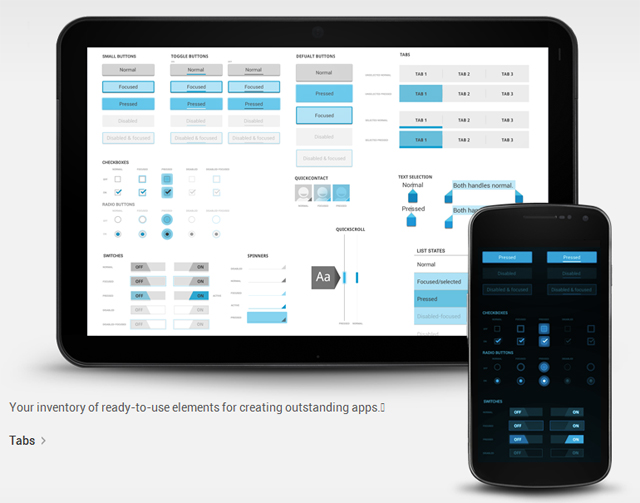 Google’s goal with Ice Cream Sandwich is to present a more unified and distinguishable platform UI from here on out. They’ve been hard at work trying to figure out ways to maintain their “open” approach, while also maintaining some sort of consistency. They want developers to know that they have worked hard on creating Ice Cream Sandwich UI with “the users’ best interests in mind,” and encourage them to apply and adapt these methods when developing for Android. To help guide developers on how to create a complimenting application for Android, they have opened up a new site called “Android Design.”

Android Design provides a plethora of resources for inspiration, guidance, and basic framework to help developers create amazing apps while keeping the overall Android experience consistent and enjoyable for all. While these are not requirements, they are suggestions which Google hopes developers will consider when developing for Android. It’s nice to see Android still leaving the ultimate decision in the hands of the devs, but it’s also amazing of them to provide all the necessary resources to help make things easy for those looking to expand off their excellent UI. I’m pretty confident that developers will begin adopting Android’s latest UI elements in favor of being recognizably different from the overall look and feel of Android.

This is just more great news and resources provided by Google to help control the “fragmentation,” while still allowing developers the freedom of to create as they see fit. Many will argue that without requirements being enforced, it won’t change the “fragmentation” issues, but I have to disagree. I’m still for developers having the freedom to steer completely off the beaten path if they wish, however, they may be less inclined to do so if they begin alienating themselves from the overall feel and look of what Android users start to expect.

I’m really liking the new Android Design portal and I recommend you all give it a look. Good job Google.