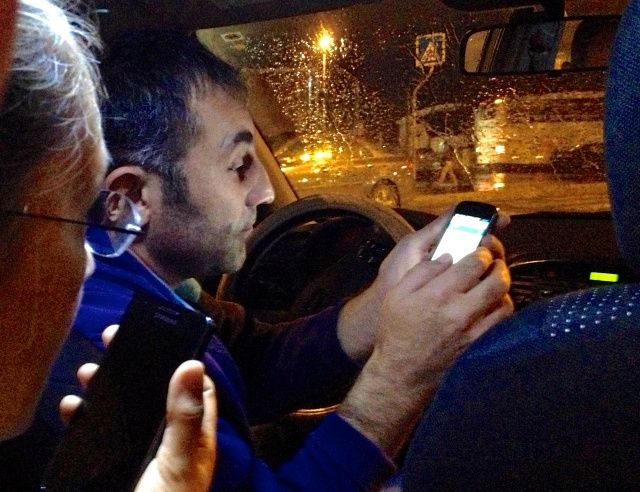 We simply couldn’t get a Turkish SIM card to work on my Nexus. While trying to make it across Istanbul during a storm, we had to ask our taxi driver to use his phone to get directions. It would have been nice to just use Google Maps on my own Android phone.

An unpleasant phone call with AT&T yesterday highlighted for me what I consider to be the biggest unsolved problem in mobility: using a smartphone in a foreign country.

Phone calls are expensive. Mobile broadband is either expensive, hard to find or both. And even WiFi can suck.

According to the UN’s World Health Organization, the human race takes more than 900 million trips to countries other than their own each year. It’s a huge problem affecting a very large number of people.

I’m a digital nomad and I live abroad. In the past nine months, I’ve lived in Greece, Turkey, Kenya and Spain. Believe me: Getting connected abroad is harder, more expensive and less satisfying than it should be.

I carry both an iPhone and a Nexus Android phone. The iPhone is under contract with AT&T, and the Nexus is unlocked. In each country I visit, I buy a pre-paid SIM card for the Nexus so I’ll have either voice or data or both while not within range of WiFi.

It usually takes a few days of going from store to store looking for something that both works and is reasonably priced.

I use my iPhone for calls using Google Voice and Skype and also for Google+ hangouts — all when I’m on a WiFi network.

As you can see, I barely use AT&T’s services. No data, no phone calls. The only thing I use them for is a very occasional text message and also to provide an anchor phone number for Google Voice. (The contract I’m currently on is the last mobile contract I will ever sign.)

For these almost worthless and extremely minimal services, I pay more than $100 per month for a two-year contract total of more than $2,600. What a sucker.

So imagine my surprise to discover that my most recent monthly bill had an extra $150 in roaming charges. Not only was I paying a lot for next to nothing, I was being charged extra for more nothing. We checked past bills, and found out that extra roaming charges were added to every monthly bill since we left the US last summer totaling $350.

It turns out that people called me using my secret AT&T phone number, which I had never given out to anyone, and I answered the phone and had conversations with them believing it was a Voice or Skype call. (I don’t know how they got my AT&T number — I give out only my Google Voice number.)

In what other sphere of life can you accidentally spend $350 and not know it?

I’m often on a WiFi network, and I make and receive calls all the time using whatever WiFi connection I have access to. It’s no big deal, and I didn’t think it was possible to receive regular roaming calls on my iPhone because I have “Cellular” switched off in the settings. I thought that any incoming call on the iPhone must be a Voice or Skype call, so I answered.

When I asked the AT&T rep how to set my phone so I could not receive roaming calls, she said the only way is to set it on airplane mode, which turns off not only voice, but also data, location and Bluetooth. In other words, don’t use your phone at all and you’ll be fine. You give us $2,600 and you get nothing — not even a phone usable on WiFi. What’s the problem?

Fortunately, there’s another way to prevent this kind of thing: Cancel my AT&T account, which is what I’m going to do, and never sign another mobile contract.

(By the way, after whining about it for awhile, the AT&T lady credited our account by about $311.)

My ordeal is one tiny example of the epic struggle international travelers face when trying to use a smartphone abroad. Overall, getting the ability to use your own phone number abroad and also get connected on the Internet requires a lot of research, a lot of money, a lot of hassle and a lot of risk.

It seems to me that it should be possible for you to go to a foreign country, use your own phone number and get unlimited data connectivity for a reasonable price. Sure, charge me more than I pay at home, and charge me even more than the locals pay. But, come on, don’t charge me $300 for a week of using my phone.

It’s a problem nobody is dealing with for a variety of reasons. One of them is that many international travelers have expense accounts, so gouging the companies signing those expense reports is good business for carriers.

Another reason is that good solutions might require carriers in different countries to cooperate with each other for the good of the customer, which is something not high on their priorities list and, in any event — especially in Europe — international carriers would have to cooperate with their direct competition.

Google has a special incentive to solve this problem for two reasons. First, Google says their business model works best when people use the Internet more. But under current circumstances, people use the Internet less while abroad because it’s so damn hard to do affordably. A single Google+ hangout or watching a single YouTube video using a pre-paid SIM card in some countries might cost you $5 a minute or more.

Second, Google is getting clobbered by Apple in the enterprise, and among deeper pocket consumers. By offering something killer for international travelers that Apple can’t match, Google would give individuals and companies a great reason to dump iPhone and buy Android phones.

Part of Google’s solution might be changes to Android that facilitate better app offline mode and better connectivity options. Another part might be using Google’s might, heft and cash to persuade carriers to offer friendlier services to foreign travelers.

Dammit, Jim, I’m a writer not an engineer. But as someone who’s almost always trying to work and communicate in a foreign country, it seems to me that Google could help bring into existence some the following:

* The ability to precisely control what’s turned on and what’s turned off — for example, to be able to turn off the phone while keeping text messaging and mobile data turned on.

* The ability to download much of the data in Google Maps for a city, so that even without a connection, you could launch Google Maps, and get turn-by-turn directions and local business information on a zoomable map. Storage is way cheaper than bandwidth, so it should be possible to download 10 GB of data for the city you’re in, enabling you to use the kinds of services visitors use without a connection.

* Better compression and ability to function with minimal data usage. In areas where unlimited data plans are simply not available (such as here in Barcelona, Spain), enable Chrome or even any browser running on Android to do something similar to Opera for Android’s Off-Road feature, which intelligently cuts bandwidth usage by up to 80%.

* The ability to securely and automatically connect to WiFi networks that are either open or have previously been logged in to to download email, texts, Google+ posts and other user-selectable data for offline viewing.

* Killer offline mode for Google+ in which circle content is downloaded and stored locally, and where you could post stuff offline and have it automatically upload when you next connect.

* Better satellite service and integration. It’s now possible to build a satellite phone that’s the same size and shape as a regular smartphone. Satellite service is massively expensive, but sometimes you want it anyway. It would be great to have more satellite capable phones, more accessible and inexpensive plans, which could be switched between either automatically or selected by the user. One option is the addition of a cheap service for satellite-based text messaging where by incoming texts are delivered by Wi-Fi, and if that’s not available by mobile broadband, and if that’s not available by satellite.

* A transformation of Google Voice so that a “real” phone number isn’t required and so that the regular phone system isn’t involved. To the greatest extent possible, give us Google Voice but divorced from the landline and cellular phone systems — a pure creature of the Internet.

There are many other things Google could do to help the hundreds of millions of international travelers each year easily and affordably use their Android phones abroad.