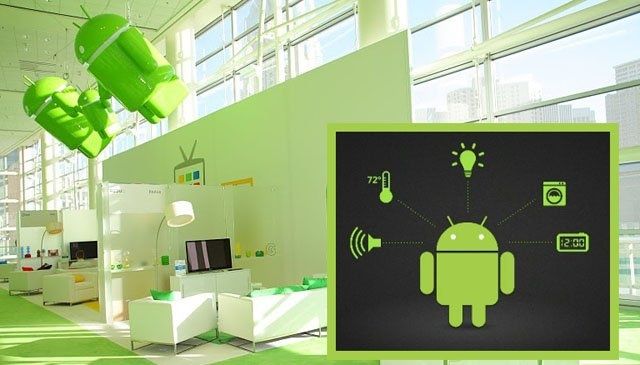 The next big frontier in mainstream consumer technology is home automation.

While home automation enthusiasts have been enjoying home automation for years, the vast majority of people don’t have it because it has always been far too expensive and complicated.

But, as we know, Moore’s Law cures all. Suddenly, it’s clear that major Silicon Valley companies are now interested in getting into the home automation space.

It’s all the more interesting because this home automation will be developed as part of the so-called “living room” experience, where every home will have a server that controls not only the all-important DVR recording of Here Comes Honey Boo Boo, but also controls the automated sprinkler system, the heating and cooling systems, the home security system and all the lights.

Although there are literally dozens of specialist companies most of us haven’t heard of doing home automation, it’s more likely that the big companies we’re all familiar with will battle for the future of home computing: Microsoft, Apple and Google are the leading contenders.

Among these companies, Google is currently in last place. Here’s why I want them to win.

Microsoft is way ahead at present. It’s Xbox gaming system is morphing into a living room media center and home automation system as we speak, and they have both mindshare and marketshare.

Apple has a real shot at home automation — if you look at the newest generation of home automation stuff (which tends to be low-cost, simple and highly modular) — products like Belkin’s WeMo lighting system, the Lockitron keyless entry system, the NEST learning thermostat and others — they either support control by Apple products exclusively, or they favor Apple devices. (The NEST is even for sale in Apple Stores, for crying out loud.)

Now, it’s early days for the new world of modular, low-cost, easy-to-use home automation for everybody. We don’t really know what any of these companies will ultimately offer.

But we do know a LOT about these companies, and how they operate. And based on what we already know, I know I want Google to dominate this space.

Why I Want Google at Home

I understand the religious wars between iOS and Android, and have deep appreciation for both sides.

In a nutshell, the iOS platform offers appliances not meant to be tinkered with. Apple controls everything, and in exchange consumers get a controlled environment where apps play by the rules, have consistent designs and things work very seamlessly without any effort, optimization, customization or anything else required of the user.

Android, on the other hand, offers user control and it gives more latitude to developers to do things their own way. In the phone market, the Android platform offers vastly greater variety and choice in hardware design.

When some random, non-technical relative asks me which phone to buy, the iPhone is a safe recommendation. It will be easy for them to use. They’ll have an Apple Store to go to if it breaks. There’s a place in the world for phones that are integrated appliances like the iPhone or open platforms like Android.

But for home automation? No way. I want Google.

For starters, home automation is a category of a gazillion hardware devices — thermometers, smart beds, lighting systems, GPS dog collars, easy-bake ovens (for grownups), intelligent fire places — we can think of hundreds of categories for home automation products, and there are hundreds more we can’t think of.

I want the platform for this to be a wide-open system like Android, where device and appliance makers can grab the code and run with it without getting permission from a central authority.

There’s another reason. I want home automation tied in with Google Now. I want to talk to my house like it’s a person, and have my house give me information and take action based on our “conversation.”

Android@Home popped up in the Google I/O demo two years ago, then went into hiding.

Google released the 4.2.2 update to Android this week for Google’s three Nexi phone and tablets. Future, top-of-the-line phones will also get the new version.

What’s really interesting about this release has nothing to do with phones or tablets.

A reference to mesh networking in the context of home automation has been spotted in the new code. The reference popped up in the following comment:

If you’re unfamiliar with mesh networking, it’s a type of networking that functions a little bit like the Internet itself.

Each device on a mesh network acts as a relay for other devices.

This is an interesting development for a home automation system. For example, a home security system could connect to the Internet over Wi-Fi and also to a central control computer to handle the home automation tasks. Cameras and lights associated with the home security system could themselves function as essentially Wi-Fi hotspots for the sprinkler system which could provide access and control to the heater and camera in the dog house. This enables the dog house to be connected to the home Internet connection even though it’s too far away from the central router and separated by too many walls.

So that’s exciting. But now for the most promising and awesome news of all: Recently, the same source that found the mesh networking comment discovered many new “com.android.athome” references in new code in Google Now, as well as a reference to a “Card” for turning lights on and off.

(Home automation systems always start with lights, because they’re so simple. The control is either on or off.)

But you can imagine a Google Now “card” for every conceivable home automation appliance in your home.

I don’t know about you, but the very idea of Google Now being the interface for home automation makes me feel all funny inside. (In a good way.)

Like I said, it’s early days for home automation. But you’re going to be hearing a LOT about it over the next five years.

And I hope we see some major Android@Home goodies at the upcoming Google I/O on May 13.

Microsoft is ahead and Apple has a market advantage. But I really want Google’s Android to control my home automation system.