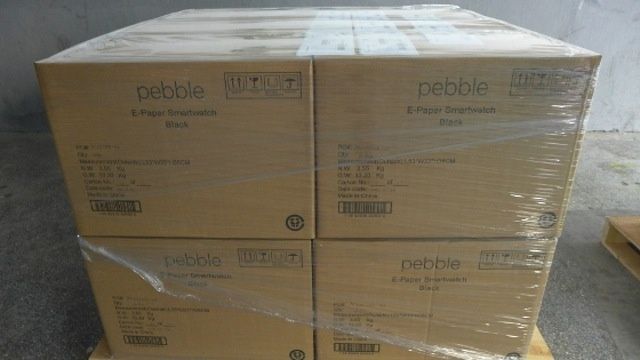 Pebble was at CES earlier this month to announce that its much-anticipated smartwatch had entered mass production and was ready to begin shipping today, January 23. The company has now begun notifying some early backers that their order is on its way, but the vast majority will have to wait a little while longer. The device has been hit by supply issues that have somewhat scuppered its rollout, and the first batch is said to include just 500 units.

Meanwhile, the Pebble app for iOS is delayed, too.

The Pebble was a Kickstarter sensation back in April 2012, attracting almost 69,000 backers and amassing more than $10 million in funding — making it the biggest Kickstarter project to date. It’s no wonder, then, that we’ve had to wait a while for it to start shipping. Pebble announced today that it will be “sending out the first batch to the very first backers this afternoon.”

If you didn’t get your order in early, however, you may be in for a long wait yet; the company also warned that there are “still some kinks and issues that we need to work out.” The Next Web reports that there were just 500 units in the first batch.

Pebble is also having trouble getting its iOS app approved by Apple. It was submitted more than two weeks ago, and Pebble was hoping to have it in the App Store before the device started shipping. But it’s yet to gain approval. That means that when backers with iOS devices receive their Pebble, all they’ll be able to do with it is control notifications and music — they won’t be able to upgrade their smartwatch or install new faces.

Fortunately for those with an Android device, that app’s still on track to hit Google Play tomorrow.

Pebble promises that it will ship more units “soon.” It’s also sending out address confirmations to its backers several days ahead of their actual shipment.