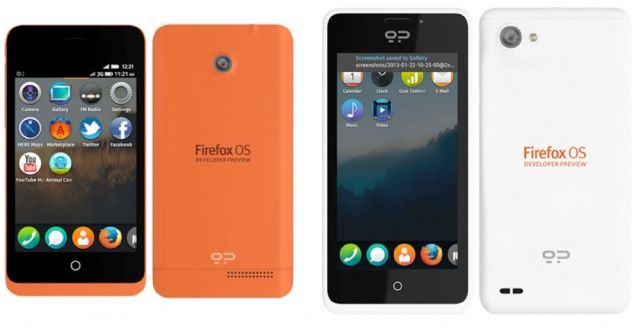 Although Mozilla has stated that it won’t produce hardware for its upcoming Firefox OS, the company has teamed up with Spanish startup Geeksphone to offer a pair of developer devices. Called Keon and Peak, the devices are designed to provide developers with the opportunity to “tap the future of mobile” and get to grips with the platform that will soon be trying to steal marketshare from Android and iOS.

Given Mozilla’s focus on emerging markets, it’s Keon, the entry-level device, that the company appears to be pushing most. Powered by a single-core 1GHz Qualcomm Snapdragon S1 processor, the device sports a 3.5-inch HVGA (480×320) display, 512MB of RAM, and 4GB of internal storage. It also offers a 3-megapixel rear-facing camera, and a microSD card slot.

Peak is a little more advanced, packing a 4.3-inch qHD display with a 960×540 resolution, and a dual-core 1.2GHz Qualcomm Snapdragon S4 processor. It also offers 512MB of RAM, 4GB of internal storage, and two cameras: an 8-megapixel rear-facing camera, and a 2-megapixel front-facing camera.

Neither of these devices are going to compete with today’s high-end smartphones, of course, but they’re not aimed at consumers. They’re aimed at developers who want to test and build for Firefox OS prior to its public release. Mozilla hasn’t announced when the devices will begin shipping, or how much they’ll cost.

When it’s launched, Firefox OS will be an open source platform that any third-party smartphone manufacturer can adopt — just like Android. And it’ll be competing alongside Android, iOS, Windows Phone and others for a share of the smartphone market. Of course, the key to success here is a wealthy selection of software, and these developer devices will get the ball rolling.

Research in Motion recently took a similar approach to its upcoming BlackBerry 10 operating system, by offering developers a preview handset running its new software. This allows them to familiarize themselves with the platform and its features, and then build and test their apps for it so that they’re ready for its public debut. Although the hardware isn’t final, it’s a good representation of things to come.

Google’s Nexus devices are also built for the same purpose. Although they aren’t exclusive to developers or pre-release devices, they do offer the latest Android updates before any other smartphones or tablets, allowing developers to try out new features and adapt their software for them.

If you’d like to try out Firefox OS yourself, check out this little trick to get it running on your Mac.