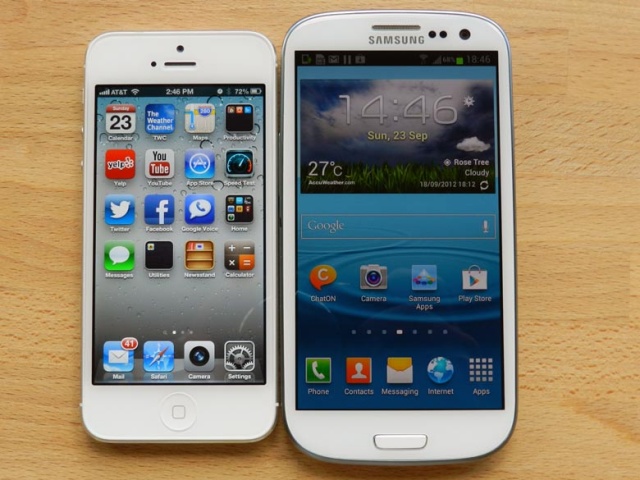 Apple and Samsung are the only two smartphone manufacturers currently seeing any growth in the United States. The pair are slowly eating away at the market share held by their rivals, including LG, Motorola, Research in Motion, and HTC. In the three months leading up to November 2012, Samsung increased its market share from 25.7% to 26.9%, but Apple is catching up with the Cupertino company enjoying slightly more growth.

Apple’s share increased from 17.1% to 18.5% over the three-month period, giving it an addition 1.4 percentage points, according to the latest data from comScore. That’s just a little more than the 1.2 percentage points Samsung gained during the same time. Between them, they’ve collected 2.6 percentage points.

If both companies are growing, it can only mean one thing — their competitors are the ones who are getting hit. LG, Motorola, and HTC make up the top five smartphone vendors in the U.S., but not one of them saw any growth.

Apple overtook LG just last month, largely thanks to the overwhelming demand seen for its iPhone 5, and it appears as if the Cupertino company is going to hold onto second place for the foreseeable future. LG could have a chance to reclaim the spot with its hugely popular Nexus 4, but it appears the company simply cannot produce them fast enough.

Apple also sits in second place when it comes to smartphone platforms. Its iOS operating system gained 0.7 percentage points over the three months, giving it a 35% share of the market. Android has first place in the bag with more than half (53.7%) of the market share; it gained 1.1 percentage points.