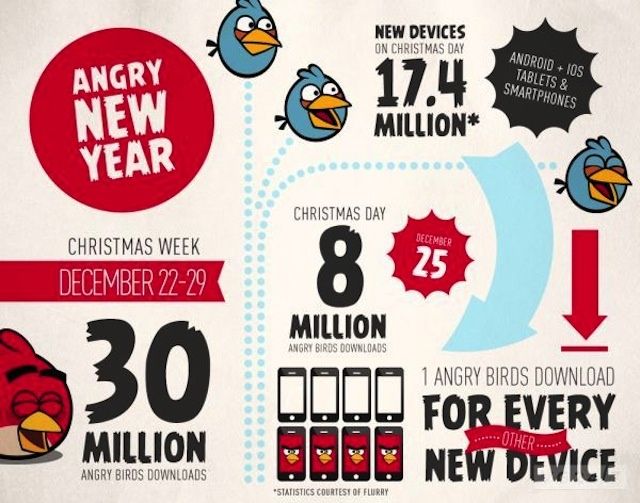 Angry Birds continues to be one of the most successful games available on Android and iOS, and despite already racking up more than 1 billion downloads across all platforms, it continues to be a big seller. This Christmas, the surge in Android and iOS sales saw Angry Birds downloads boosted again. In just one week, the title was downloaded more than 30 million times.

The spike was obviously helped by all of the mobile devices that were activated over the festive period. Analytics firm Flurry reported earlier this week that a record 17.4 million Android and iOS devices were activated on Christmas Day. That helped the App Store and Google Play see 328 million downloads combined.

During the week between Christmas Day and New Year’s Day, 50 million Android and iOS devices were activated, and a staggering 1.76 billion apps and games were downloaded.

Angry Birds sales aren’t likely to go slow during 2013, either. Developer Rovio has promised that it has even more treats in store for the title for the year ahead.