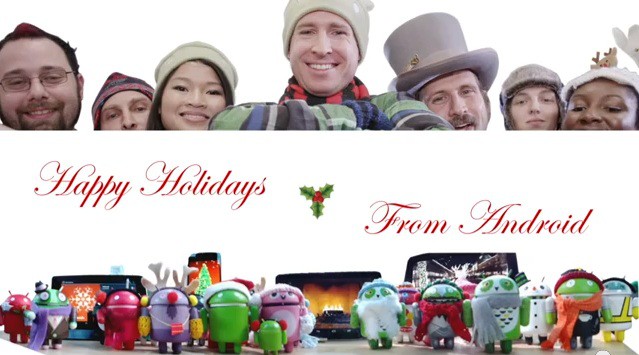 ‘Twas the Friday before Christmas, and all through the Plex
Not a developer was coding, or banging his head on a desk;
The Nexi were docked by the outlet with care,
In hopes that a user would soon play with their hardware;
The team members were celebrating and sharing some nog,
While poor little Bugdroid stood alone like a log;
When, what to his wondering eyes should appear,
But a caring developer with an Android beanie covering his hair;
With an idea in his head and Nexus 4 in his hand,
He created for Mr. Bugdroid a virtual winter Christmas land;
With a photo sphere pic and a wallpaper of fire,
Bugdroid’s friends soon joined in their holiday attire;
And above the devs watched, as the Bugdroids convened,
Wishing a Happy Holiday to all, from Android and team.