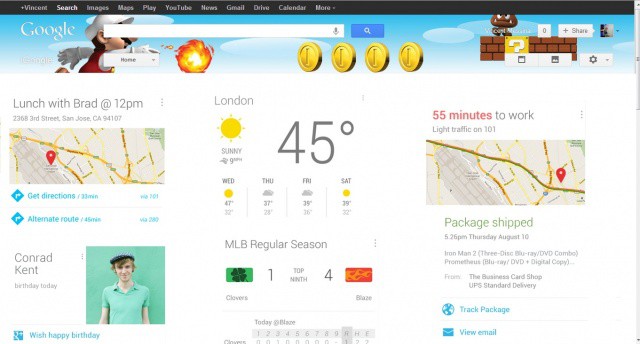 A recent discovery by Google+ user François Beaufort has unveiled Google’s plans to eventually bring Google Now to Chrome. There is already a “skeleton for Google Now for Chrome” in place, and even Google themselves responded by saying:

“Google confirmed that it’s working on the project but stopped short of committing to it. “We’re always experimenting with new features in Chrome, so have nothing to announce at this time,” spokeswoman Jessica Kositz said.

I think bringing Google Now to Chrome is an excellent idea and the more I think about it, Google Now would make the perfect iGoogle replacement.

If you’re not familiar with iGoogle, it’s basically a personalized homepage for Google Chrome users. iGoogle acts as a web portal to all the content and information that interests you — essentially an Android home screen full of widgets.

Google has announced that it will be discontinuing iGoogle by November 2013. While Google has made no comment about a possible replacement for iGoogle, I believe Google Now makes perfect sense.

Google has been slowly unifying the user experience across both Android and Chrome and if Chrome is to have a user-personalized homepage, I can think of nothing more personal than Google Now.

Google Now provides users with the most relevant and up-to-date information by intelligently predicting the information they most likely need. Information such as the weather, traffic conditions, flight schedules, etc., become meshed with your daily activities or repeated actions.

For example, if you’re okay with sharing information such as location data with Google, Google can then predict places you repeatedly visit such as work or home and automatically provide you with traffic condition and ETA without you needing to ask for it.

While that example is best suited for Android and your mobile device, another great example could include tracking information for a package. Google can identify shipping information from within an email in Gmail and then update you via Google Now when your package is on its way.

The last example is perfect for the desktop and would save users from wasting their time constantly checking to see if their package is on the way. Just forget about it, and let Google tell you when it’s on the way via a browser notification or homepage card.

I thoroughly enjoy having a centralized homepage I can visit that will keep me updated with the information that’s most important to me and would love to see Google Now become that page.