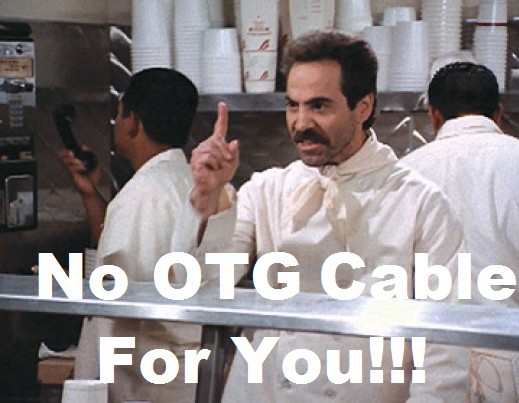 Boy, oh boy, just when you thought it couldn’t get any worse Google goes ahead and essentially pulls a bait-and-switch. I’m really not sure what excuse Nexus 4 owners are going to come up with to justify Google’s latest charade but I’m extremely disappointed. What am I making such a fuss about you ask? It’s been discovered that the Nexus 4 does not support USB (for peripherals) despite original documentation clearly stating that it did.

Why is this such a big deal? It’s a big deal because a large number of Android users who purchased the Nexus 4 were planning on using the USB support to extend the measly storage capacity offered by the Nexus 4. For example, some Android users figured they could pick up the cheaper 8GB model, purchase a $1 OTG cable, and use usb sticks to store their movies, music, or any other files that may take up a large amount of space. Now they can’t!

The worst part: Google hasn’t said a word about the issue. What have they done? Slyly update their support page to now state that the Nexus 4 does not support USB.

No explanation, no apology, just a cover up. Shame on you Google.

It’s not just those looking for extended storage that suffer from this. Anyone who was hoping to use an OTG cable to hook up a gaming controller or any other peripheral must now look for another solution. It’s just disappointing in so many ways.

Let’s see… we have a botched launch, customers left in limbo, delayed shipping, a glass back that cracks fairly easy, no CDMA, no LTE, limited storage, and no USB support. But… but… it’s a Nexus and it’s only $349 off contract.

Google, I am dissapoint.