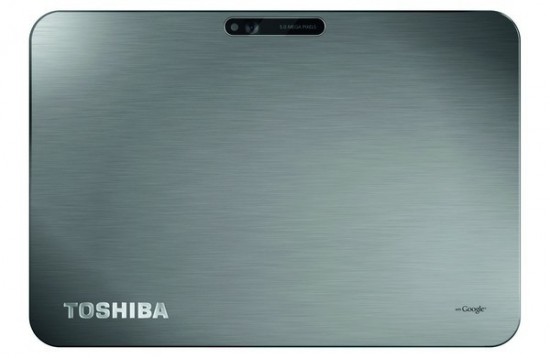 Toshiba has plans to go thin this year at CES, and when I mean thin, I mean half as thin as their Toshiba Thrive Android tablet. Toshiba has announced its plans to show off the “World’s thinnest and lightest” tablet and claims the 10.1″ AT200 will only measure in at 7.7mm thick. The AT200 (aka Toshiba Excite) isn’t new to the blogoshpere and was announced back in September, with a December launch date. For whatever reason, Toshiba decided to delay the launch of their 558 gram razor thin tablet until CES, where they plan to show it off alongside their waterproof tablet and 7″ budget tablet.

The Toshiba tablets should make quite the splash at CES (although only one is splash resistant) and depending on price, should give Toshiba the second look they’re hoping for. The Toshiba AT200 will feature a 10.1-inch 1280×800 resolution display, a 1.2GHz dual-core OMAP 4430 processor, 5MP rear camera, 2MP front facing camera, micro HDMI out, 16GB or 32GB storage, and Android 3.2. With its thin frame and light weight, this may be a good option given the right price.

Their 7″ budget tablet is looking to be around the $199 – $299 price range and is said to be featuring a 7″ 1024 x 600 display, a Qualcomm Snapdragon processor, microUSB, microSD, Bluetooth and Wireless LAN. Other specs are scarce but we’ll have a look at this low-cost tablet solution soon.

The Toshiba waterproof tablet is rumored to have a brilliant OLED display and wireless charging capabilities but everything else is a mystery. They should have a prototype on hand and I’m betting the “waterproof” is just another misleading splash resistant labeling.