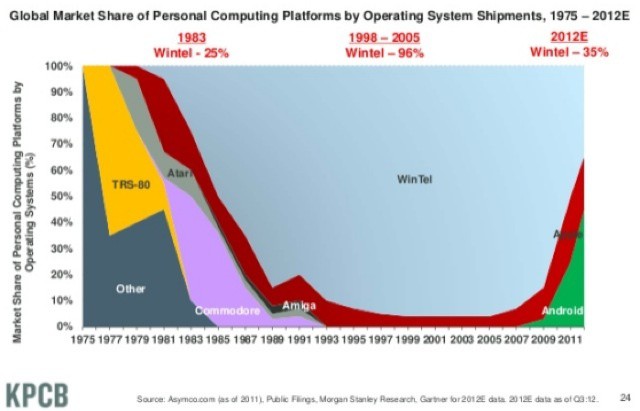 Want to see an amazing chart? It’s right above this post, and it shows the rise and fall of computer platforms (including mobile) as a percentage of overall marketshare from 1975 to 2012.

What does it tell us about the state of the computer industry? Even with iOS’s success, Apple is proportionally selling about the same percentage of computers as it has since the early 1980s. Windows as a platform, though, has fallen from a ninety-six percent share of the overall computer market between 1998 and 2005 to a mere thirty-five percent in 2012.

Why? Apple and especially Android are killing WinTel.

The chart comes from Mary Meeker, a partner at leiner Perkins Caulfiend and Byers, from her “2012 Internet Trends Year-End Update” report. And woof, do things not look good for Windows.

It’s pretty obvious what’s happening here. Back in the halcyon days of Microsoft and Intel’s partnership, and before the rise of mobile and ARM, pretty much everything ran Windows, especially after Microsoft released Windows 95.

Over the last five years, though, the situation has changed. The rise of mobile ARM-based devices running iOS or Android have simply collapsed Windows’s marketshare, with no end in sight.