Apple’s App Store has been the undisputed revenue king since its inception, however, its once enormous lead is now quickly shrinking. That leading edge over Android is an argument that’s becoming moot as the Play’s revenue continues to grow at a ravenous rate. According to App Annie, an industry leader in app store analytics and marketing, Google Play’s revenues have skyrocketed 311% in the last year, compared to the App Store’s more conservative 12.9%.

When the Play store finally caught up to the App store in sheer number of available applications, we all heard the argument that having a large collection of apps means nothing if they’re crap and not making their devs any money. However, that is no longer the case with Google Play, as it’s quite obvious that the Play store is making money, and doing so at an increasing rate.

Globally, Apple’s App Store still produces 4x the amount of revenue as the Play Store and that’s no number to sneeze at. That’s a huge difference, and one that has been the driving force behind developers choosing iOS as their platform of choice.

However, the once all-too-common “hit iOS title finally makes its way to Android,” is slowly becoming a thing of the past as more and more developers are opting to release apps and app updates simultaneously across both platforms.

When it comes to monetizing on both platforms, App Annie reports that games, and developers that have just a few apps, do much better than others. In fact, 9 of the top 10 publishers by revenue on both iOS and Google Play are game publishers. So if you’re looking for the big money, you might want to start thinking about developing a game. 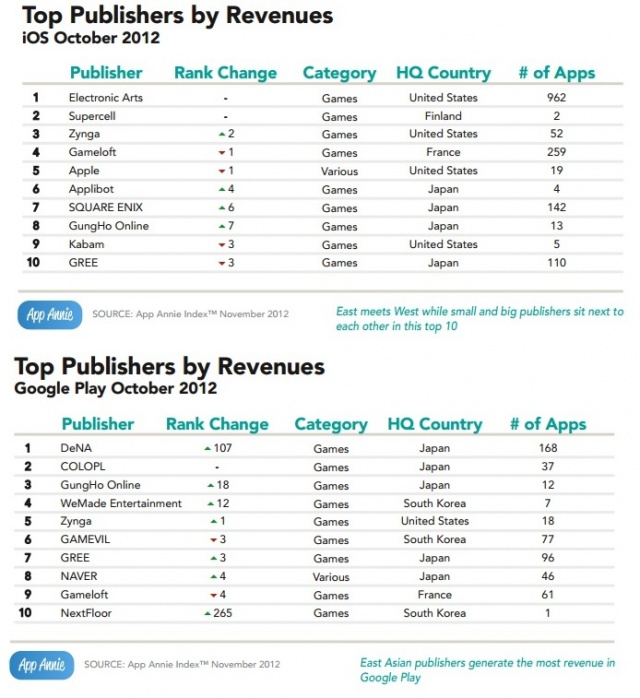 Other interesting tidbits from App Annie’s Index include the fact that Japan has overtaken the US in Google Play revenue while East Asian publishers begin to overtake app stores in general.

If you’re a serious developer, it’s a no-brainer to develop for both Android and iOS, but if you’ve been clinging to the whole “developers don’t make money on Android” mentality, it’s time to let go.

There’s a plethora of additional information within the App Annie Index, so if you feel like diving in, hit up the source link below.