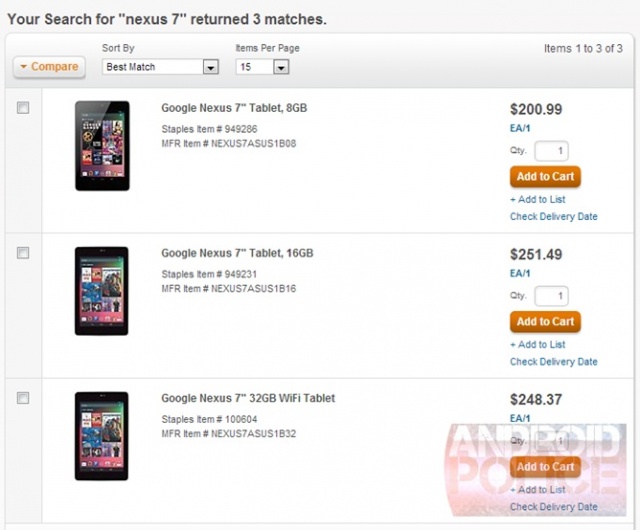 What do you guys think? Can we safely say a 32GB Nexus 7 will be arriving soon? This bad boy has popped up on so many inventory lists that I’m almost going to guarantee it… nay, I am going to guarantee it! The most recent sighting comes from a reader over at Android Police who sent in a screenshot of a Staple Advantage listing showing the 32GB Nexus 7 with an estimated arrival date as early as October 18!

Now, we don’t expect to see them magically appear on Thursday, but it is refreshing that a company such as Staples has the 32GB version in their system. I’m guessing we will see them hit stores very soon, and if the Staples Advantage price is to be believed, it would appear that the 32GB model will be replacing the 16GB model at $249.

While that is sure to rub early adopters the wrong way, it’s a smart move to try and compete during the holiday season with the likes of the new Kindle Fire HD and soon to be announced iPad Mini.

I am one of those early adopter who purchased a 16GB model and I’ve been complaining for a while that it’s just not enough space. I’ll be picking up the 32GB when it hits and giving my 16GB to my kids. At $249 a pop, I get two of these bad boys for the price of one Apple iPad. Not bad… not bad at all.