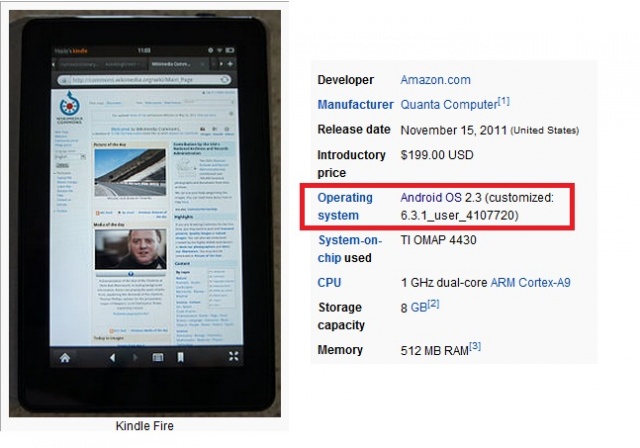 Jeff Bezos was so proud of himself today when he announced the new Kindle Fire HD line to anxious journalists crammed inside an airport hanger. He was quick to point out the success of the original Kindle Fire and even decided to go as far as denouncing Android tablets as “gadget that nobody wants.” His exact remark was:

I have numerous issues with the statement he made and I’ll tell you why.

Bezos is implying that those other Android tablets failed because “people want services.” So he’s basically saying no one bought Android tablets because Google sucks and doesn’t offer any good services. He can’t possibly be saying Android sucks, because after all, his successful Kindle Fire is built off of Android.

Let’s forget the jab at Android tablet’s being gadgets, because apparently Bezos is too daft to realize that’s exactly what his Kindle Fire is. Let’s move on to the services, aka Google Play.

Google, Android, and Google Play have come a long way. Not only is Android the leading mobile OS, but it completely annihilates Amazon’s App store user base. There are over 1.3 million Android devices being activated everyday. All of which come preloaded with Google Play — not the Amazon App store.

There are over 600,000 apps in the Google Play Store, with over 20 billion downloads to date! Amazon’s App Store just recently surpassed 50,000 apps (you won’t see a slide boasting that) and they won’t release any numbers about downloads. In fact, Amazon is quite good at keeping its numbers secret.

Amazon knows its App Store isn’t even in the same league as Google Play, that’s why you’ll only see them boast about how many movies and books they offer.

Google has since added Movies, Magazine, Music, and most importantly gift card support.

Now it’s time for a reality check. Are there tons of crappy Android tablets out there? Why yes, yes there are. Are consumers smart? That’s debatable. However, consumers know a good deal when they see one, and Amazon hit the money spot when they released the Kindle Fire for $199.

That price, coupled with their service, is why people chose it over other Android tablets. But guess what Bezos? Google and ASUS released a little tablet called the Nexus 7, and it’s been selling like hotcakes. Why? Because it has great specs, vanilla Android, and a $199 price tag.

Most non-Applites prefer not to be ripped off. Time and time again, Android tablet manufacturers have failed at pricing. I guarantee you, if the new Kindle Fire HD tablets were priced at $599, they wouldn’t do so well. Truth!

I’m quite disappointed at how much Bezos likes to act as if Android has nothing to do with the Kindle Fire or its success. You hear no mention of Android — unless of course it’s to ridicule other tablets running it. Seriously, would be so hard to acknowledge the operating system with which your entire Fire brand was built?

Hey Jeff! Reality check: without Android, there would be no Kindle Fire! You’re as bad as a professional athlete who denies using steroids to boost his performance — especially when everyone knows the truth.

Don’t get me wrong, I love Amazon, I love the Kindle Fire (mostly for giving birth to the Nexus 7) and I’m even considering a Kindle Fire HD, but I’m getting tired of Bezos pretending like Android isn’t the foundation upon which their Kindle Fires stand. You’re Kindle Fire is an Android tablet Bezos, deal with it.