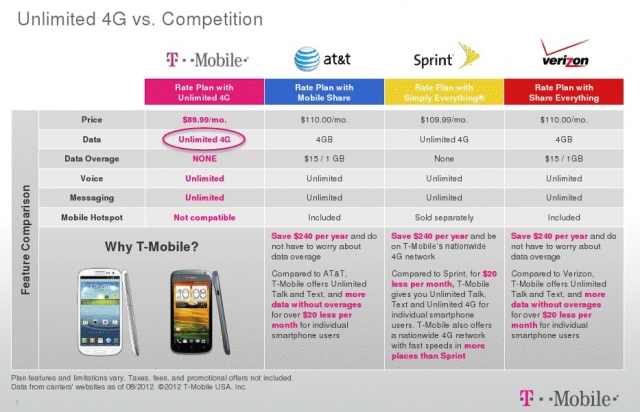 T-Mobile isn’t exactly the carrier of choice these days. After their failed merger with AT&T, they seem to be lost in carrier limbo. Verizon and AT&T have the largest 4G LTE coverage, Sprint has the only true unlimited data plans, and all three of them offer the iPhone. So where does that leave T-Mobile? T-Mobile knows it has to do something, and it appears that something, is unlimited data for $20 a month.

Considering the backlash from Verizon and AT&T’s new shared data plans, it’s a smart move my T-Mobile. They also couldn’t just bring unlimited data to the table as if they were the only ones — they had to make it the cheapest, and that’s just what they’ve done.

At $89.99 a month, you get unlimited talk, text, and nation wide “4G” data on T-Mobile’s HSPA+ network. It may not be LTE, but it certainly isn’t your typical 3G either. This will certainly have consumers re-thinking their current and future situations, that’s for sure.

So, what do you think? Worth it, or will T-Mobile pull the old switch-a-roo once they’ve updated their infrastructure? I guess we’ll just have to wait and see. At least for now, you can save yourself a bit of cash by switching.

BELLEVUE, Wash. — Aug. 22, 2012 — T-Mobile USA, Inc., today announced an industry first — a truly Unlimited Nationwide 4G Data plan. Featuring no data caps, speed limits or bill shock, as well as fast, dependable nationwide 4G coverage, T-Mobile’s new Unlimited Nationwide 4G Data plan offers the ultimate worry-free experience. The new plan is designed to satisfy both data-hungry customers who want to experience all their smartphones are capable of and those wanting the peace of mind of never having to keep track of their data usage.

Today’s smartphones offer amazing experiences, and consumers are increasingly relying on them for everything from navigation, entertainment and shopping to just staying connected. With the introduction of the Unlimited Nationwide 4G Data plan, T-Mobile® is the only U.S. carrier to empower customers to do what they want, when they want, with their smartphones by making fast, nationwide 4G data accessible for everyone — without limits and at a great value.

“We’re big believers in customer-driven innovation, and our Unlimited Nationwide 4G Data plan is the answer to customers who are frustrated by the cost, complexity and congested networks of our competitors,” said Kevin McLaughlin, vice president, marketing, T-Mobile USA. “Consumers want the freedom of unlimited 4G data. Our bold move to be the only wireless carrier to offer an Unlimited Nationwide 4G Data plan reinforces our value leadership and capitalizes on the strength of our nationwide 4G network.”

For customers seeking an unlimited experience on their smartphones, T-Mobile offers several ways for new and existing customers to take advantage of its Unlimited Nationwide 4G Data plan. New customers can purchase any smartphone in T-Mobile’s robust lineup of innovative devices or bring their own compatible smartphone and have access to a worry-free unlimited data experience on T-Mobile’s fast nationwide 4G network. Current T-Mobile customers on Classic or Value plans can simply upgrade their existing service by adding an Unlimited Nationwide 4G Data plan.