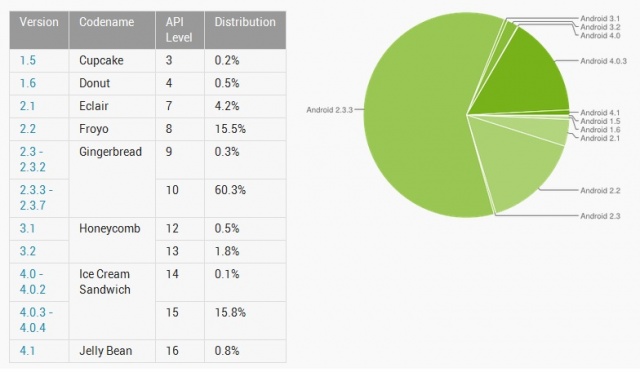 Boy has it been a slow road for Android 4.0, and while the numbers are still dismal, Ice Cream Sandwich is now populating the second highest number of devices accessing the Google Play Store. Gingerbread remains the majority leader with 60.6% of Android devices running it — quite sad considering it’s almost two years old.

Even though ICS is in second, it’s only populating 15.9% of Android devices, with Froyo a close third at 15.5%. Continuing down the line, Eclair is next at 4.2%, followed by Honeycomb at 2.3%, while the brand new Jelly Bean has debuted at .8%. Yes, there are still a few die-hard users who just can’t let go of their Donut and Cupcake devices, but together they only account for .7% of the pizza slice.

Jelly Bean has debuted at a slightly higher percentage than Ice Cream Sandwich, which hopefully points to a much quicker adoption and update rate. I’d hate to see it crawl forward as ICS has, although I don’t blame Google for this.

That does it for this month, and with Nexus 7 stock being replenished, I’m eager to see how high JB jumps this time next month. See you then.