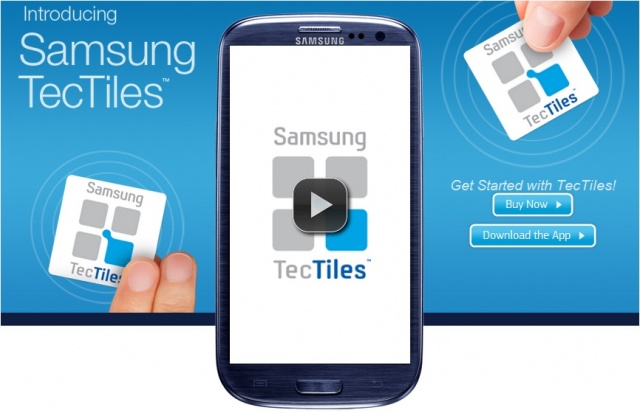 Samsung has announced it will be launching their own programmable NFC tags to go along with the release of the NFC enabled Samsung Galaxy S III. NFC (Near Field Communication) is still a bit of a mystery to some people and Sammy hopes to clear things up by showing consumers how they can help automate their lives with their new TecTiles and an NFC enabled device.

Programmable NFC tags are nothing new, but the average consumer has no idea of their existence. It’s not surprising, given the small amount of NFC enabled devices available. Other large manufacturers such as Sony and LG have similar products, but with a giant like Samsung pushing such a product, we’re betting people will start to take notice.

So what can you do with programmable NFC tags and an NFC enabled phone?

The first thing you’ll need is an NFC enabled phone and some TecTiles. From there you’ll have to download the TecTile app, which can be found in the Google Play Store. You can then program your TecTiles to activate specific actions on your NFC enabled phone whenever your phone comes in contact with the tag.

Now it’s time to let your imagination fly. Program the tags to activate silent mode and activate your alarm when you go to bed. Put a tag in your car to activate car mode, GPS, Bluetooth, etc. Then there’s my personal favorite: a tag on the toilet to activate your favorite mobile game (because that’s usually where I spend most of my time playing games).

Businesses can also take advantage of these NFC tags by placing them within their establishment to allow for automatic check-in integration with social networks such as Foursquare and Facebook. NFC tags are much more convenient to use versus other systems such as QR codes — only problem is you need an NFC chip in your device to be able to interact.

Samsung will be selling their TecTiles for $14.99 for a pack of five. You’ll be able to grab them online and in-store at AT&T, Verizon, Sprint, and T-Mobile. If you have an NFC enabled phone, they’re definitely something you should check out. In fact, we’re going to be reviewing a few NFC tags (not TecTiles) soon and you’ll get to see them in action once we’re finished.

For all the details about Samsung’s TecTiles and the TecTile app, you can read the full press release below.

DALLAS — June 13, 2012 — Samsung Telecommunications America (Samsung Mobile) is helping consumers realize the potential of NFC technology today with the creation of Samsung TecTiles™ and the TecTile™ programming application. With the largest user base of NFC-enabled devices in the United States and TecTiles available in all four major carrier stores and at major online retailers at the launch of the Galaxy S III, Samsung is ensuring NFC becomes a part of daily life.

With a simple tap of an NFC-enabled phone to a TecTile, consumers are able to automate everyday functions of a smartphone including sending a “headed/at home” text message, silencing the phone when entering a meeting, setting an alarm, and dimming the display when going to bed.

“With millions of NFC-enabled Samsung Galaxy smartphones currently in the market and the arrival of our flagship device Galaxy S® III, Samsung saw an opportunity to expand the value of NFC beyond mobile payments,” said Dale Sohn, president of Samsung Telecommunications America, the No. 1 mobile phone provider in the U.S. and worldwide-. “The launch of Samsung TecTiles is another example of Samsung’s ability to innovate new products and applications that improve the way we use our mobile devices for everyday tasks.”

Samsung TecTiles are easy to program with any NFC-enabled smartphone and the free application, which can be found in the Google Play™ marketplace. TecTiles can be reprogrammed as often as needed to complete any of the following functions on an NFC-enabled phone:

Priced at $14.99 for a pack of five, TecTiles programmable NFC sticker tags are now available for purchase online and in-store at AT&T, Verizon, Sprint, and T-Mobile. The Samsung TecTiles app is now available for download at the Google Play store.

© Samsung Telecommunications America, LLC. Samsung, Galaxy, Galaxy S, and TecTiles are all trademarks of Samsung Electronics Co., Ltd. Android and Nexus are trademarks of Google Inc. All other company names, product names and marks are the property of their respective owners and may be trademarks or registered trademarks.
Links for more information: