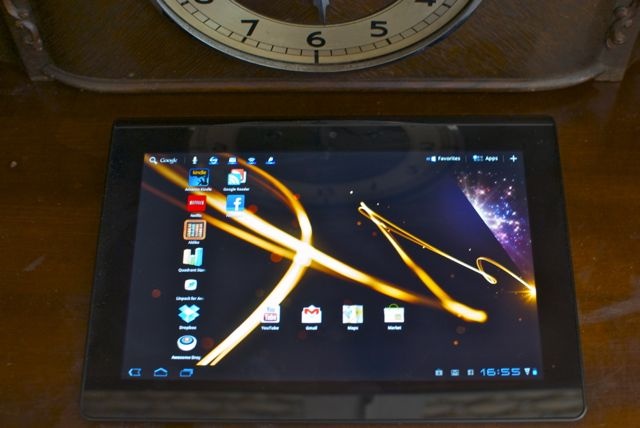 The Sony Tablet S does things different for Android tablets, but does it do them differently enough?

One of the first things you’ll notice about the Sony Tablet S is its design. It’s not flat, but a wedge that fits comfortably into the hand, like a magazine with its cover folded back. The Tablet S looks wholly unlike any other tablet on the market. It’s something original, something that instead of simply trying to be an iPad knock-off has its own distinct design language. And it’s without a doubt the best thing about the Sony Tablet S. It’s just a shame that this brave and wonderful sense of identity in a sea of iPad clones is only skin deep.

One of the things I have always admired about Sony is that when they are late to the game in entering a market, they tend to think outside the box and try to reinvent the category. For example, back when netbooks were popular, it took Sony a while to enter the category (despite the fact that Sony had arguably invented the ultraportable laptop with its smaller Vaios half a decade before). When Sony did announce its first netbook, though, it was a stunner: the Vaio P, an attractive, beautifully designed netbook so svelte, sexy and tiny it could (very) arguably fit into your backpocket.

The Sony Tablet S is a lot like the Vaio P. Sony was late to enter the tablet game, but when they did, they tried something different.

When you hold up an iPad, what you are holding up is a frame, a window to a world of interactive content. The Sony Tablet S, though, uses a different metaphor: a tablet is like a magical interactive book, straight from Neal Stephenon’s The Diamond Age. You should be able to interact with it, type on it, watch videos and listen to music on it, but it’s mostly for reading, so it should comfortably rest in the hand… and you should be able to read it one-handed. 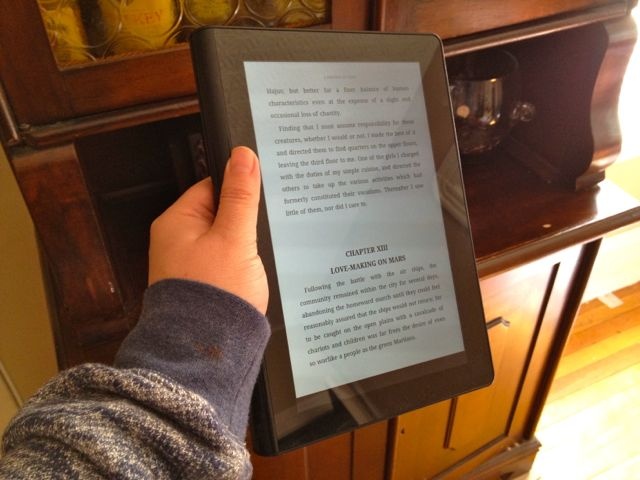 The Sony Tablet S feels great in the hand thanks to its unique design, even when reading the Martian Kama Sutra.

It’s a wonderful metaphor, and visually, I love the Tablet S’s design language. The wedge design works well both when you’re using the device in portrait mode and when you need to put it down flat to do some typing. The device is light enough to use with one hand, and dare I say, it feels more satisfying to hold than an iPad, Galaxy Tab or any of the competition. It’s a great, great feeling reading an e-book on one.

The problem is, when I’m not just reading the Tablet S, I don’t really like using it.

For one thing, the display isn’t exactly great to look at. A 9.4-inch affair, it’s physically smaller than most Android tablets, but that’s actually a boon, as I personally find most Android tablet displays a little too long in the hand. At 9.4-inches, the Tablet S is about the same length as an iPad, even with a different aspect ratio. Resolution-wise, the 1280 x 800 display isn’t Retina, but packs more pixels into a smaller footprint than the iPad 2, so clarity’s pretty good. And the blacks are nice and deep thanks to the Tablet S’s use of Sony’s proprietary TruBlack Display – the same technology that powers their Bravia HDTVs. But the colors all somehow feel blurry or washed out, as if we were viewing them through a film. It’s also darker and murkier than a lot of displays.

Then there’s the stock Honeycomb 3.1 Android experience. Sony hasn’t done much to differentiate themselves with the way the Tablet S feels compared to other tablets, which is a shame: it seems iike a lost opportunity that Honeycomb wasn’t skinned to be more evocative of the PSP’s and PS3’s fantastic XMB interface.

To be fair, the Sony Tablet S comes pre-loaded with a lot of Sony apps, including Sony Reader, Music Unlimited and Video Unlimited services. How useful you find these will have a lot more to do with how tied you are into Sony’s existing ecosystem of services, but they don’t do as much to differentiate the Tablet S from other tablets as Sony would probably like. For most people, they’ll likely be ignored.

One perk about using the Tablet S for gamers is that it’s PlayStation Certified, which means it can run emulated PlayStation 1 and PSP games. Crash Bandicoot even comes pre-installed, but it’s not exactly a fantastic show of the Tablet S’s gaming powers. In fact, PlayStation Certification largely just puts into perspective how bad tablets are at emulating physical analog controls.

But the Sony Tablet S does have one “killer app” and while it’s unexpected, it’s functionally a doozy. The Tablet S comes with an IR-blaster, and coupled with Sony’s fantastic universal remote app, the S becomes the center point of an entire entertainment center worth of gadgets. In fact, the Tablet S was so good as a universal remote control that it hardly ever left my living room table in the month that I spent testing it.

That’s probably a good place for it. The Tablet S makes some brave physical design decisions in taking a different approach to how we should think about tablets, but those design decisions don’t extend very deep below the service, where a more radical departure from the existing iOS / Android way of interacting with a tablet could have made Sony’s entry a serious contender. Instead, the Tablet S is a decent, but not exceptional, Android tablet which excels at two things: e-book reading and functioning as a remote control. That makes it a decent choice as a living room tablet to keep on hand to do some reading on the couch, look stuff up on the Internet, let guests use and control your entertainment center, but at $399 — or the price of an iPad 2 — it’s a hard device to recommend if you’re not already deeply invested in Sony’s products and services.

Pro: Feels great in the hand and for typing on a flat service. Decent battery life. Works well for media streaming through DLNA, and the camera is great for a tablet. Last-gen, but speedy enough. Fantastic universal remote capabilities might be the Tablet S’s killer app.

Con: Display has great blacks, but the colors are muddy and the brightness leaves a lot to be desired. During testing, we found it could take a minute or more to connect to remembered WiFi networks after coming out of sleep. Sony hasn’t done much to extend the Tablet S’s fantastic physical design below the surface, which is a lost opportunity. Weirdo proprietary charging cable (which doesn’t match any of Sony’s other proprietary charging cables, so you can’t swap).

Verdict: If you don’t want an iPad 2, if you’re already invested in Sony’s services, the Tablet S makes a great addition to your living room: it’s a good e-reader, a decent media streamer and a great remote. Outside of the living room, though, while the Tablet S tries something different, it feels mostly like a missed opportunity.