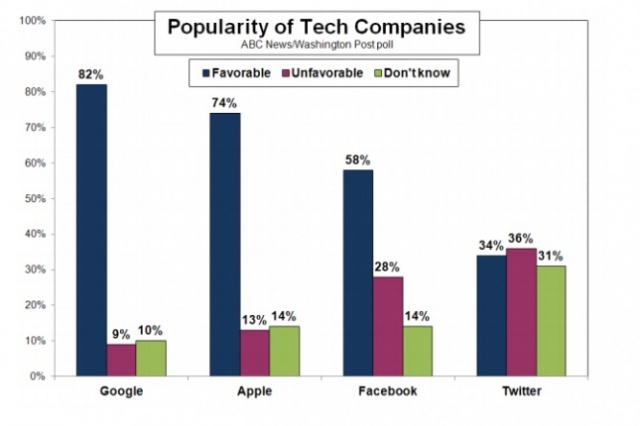 Ah, the wondrous findings of random polls. This one appears to favor my personal favorite company and therefore I won’t argue against it. The rest of you are free to sound off in the comments after reading the favorable findings of this ABC News/Washington Post poll. A random national sample of 1,007 adults were asked whether or not they had a favorable or unfavorable impression of the following four tech companies: Google, Apple, Facebook, and Twitter.

According to the survey produced for ABC News, Google was found to be the most favorable tech giant with 82% of people polled expressing a favorable opinion of Google overall. Apple was also highly favored among those polled, holding an overall favorability of 74%. Surprisingly, Facebook beat out Twitter with an overall favorability of 58% compared to Twitters dismal 34%. These findings are interesting in the fact that despite all of the negative press each tech company has endured — Google (privacy), Apple (working conditions in China), Facebook (privacy), Twitter (well, nothing I can think of) — overall, Americans still maintain favorable opinions of them.

When looking at age groups, Google and Apple’s favorability peaks among those under 30. The same is found for Facebook and Twitter. Apparently old people aren’t as hip to tech as the young bucks (thanks captain obvious). Let’s see… what else do we have:

No one really seems to care about Twitter; either that or the majority of those polled still don’t know what it is or view it as an outlet for losers sharing trivial information such as “going to the bathroom.”