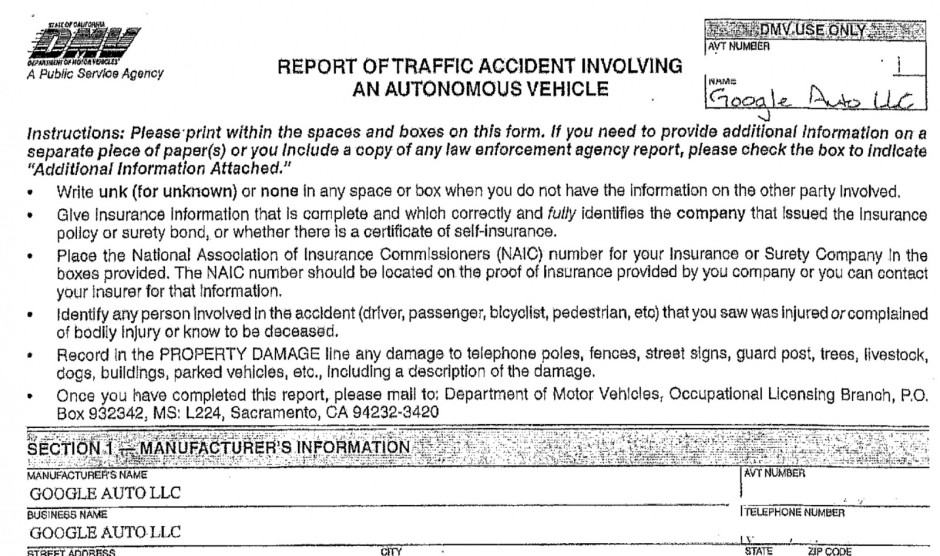 Yep. This is a form that exists now. Image: Department of Motor Vehicles

Google’s autonomous cars have taken to the road with the rest of us normals in our comparatively Flintstones-esque, human-directed rides. And the very small brush-ups are starting to come in.

In fact, the California DMV has created a form just for reporting accidents involving at least one self-driving vehicle, and it publishes these reports on its website. And while the doomsayers and doubters have wrung their hands about cars plowing into trucks filled with baby penguins, the truth is that the dozen or so accidents on the list are so hilariously small that they hardly seem worth the paperwork at all.

They should definitely file the reports; don’t get us wrong. But we imagine an eye-roll or two while it happens.

Google dominates the DMV logs, but you can also see a few appearances of other autonomous cars like General Motors’ Cruise Automation and Delphi’s Roadrunner.

The most recent accident occurred April 7, and it involved a very slight scrape between a Google vehicle and a 1999 Lexus LS400. The second vehicle was trying to pass the autonomous car on the shoulder and “very slightly contacted the Google AV.” This caused zero damage to the self-driving car and “slightly folded in” the other ride’s side-view mirror.

Interestingly, this is a theme throughout the accident reports; with one exception, it’s always the impatient and possibly crazy human drivers who cause the incidents. The DMV has seen bumps at under 5 miles per hour (multiple times), side-mirror brushes, and bumper scrapes. Injuries are rare — we’ve only heard about some back pain and whiplash — and everybody has gone directly back to work afterward.

We’re glad that the incidents with autonomous cars have proven so generally and humorously minor so far, and it’s still nice to know that robots are marginally better driver than humans if we’re going to be turning our safety over to them. Here’s hoping everything stays this funny while the future-vehicles get ready for market.