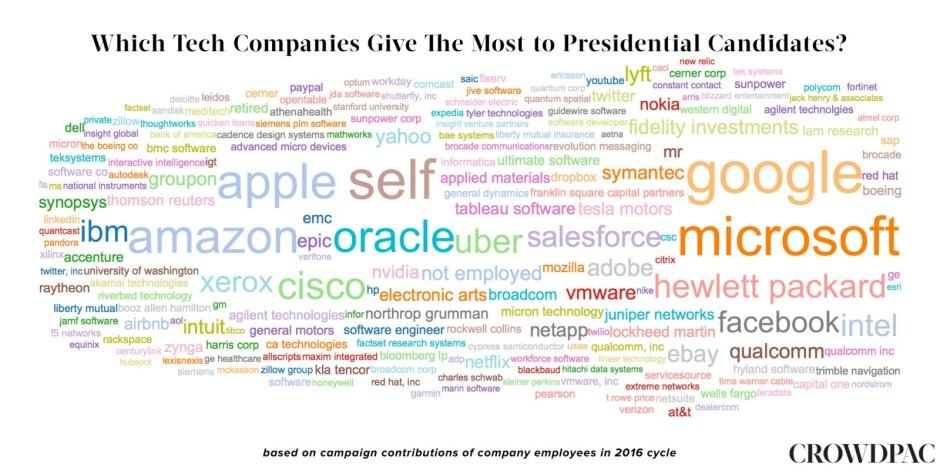 You won’t find a lot of Trump yard signs in the valley. Source: CrowdPAC

Silicon Valley campaign donations have poured way more money into the presidential bids of Democrats than Republicans, surprising nobody, ever.

This shocking revelation comes from a report from CrowdPAC, a non-partisan, political crowdfunding organization that has discovered that the companies most likely to donate to campaigns are Google, Apple, Microsoft, and Amazon. And while the findings don’t include fine-grain data like individual amounts or the actual numbers of employees, they do make one overwhelming conclusion:

CrowdPAC created the word cloud above to show where most of the money is coming from, but it also has some firm numbers about who’s benefiting most from Silicon Valley campaign donations.

The big winner is Democratic candidate Bernie Sanders, who has pulled in $4.6 million by their numbers. Hillary Clinton has received a still-massive $2.6 million, and then it drops off sharply from there. Republican candidates Ted Cruz, John Kasich, and Donald Trump have scored $471,000, $110,000, and $19,000, respectively.

While the tech world’s dollar-votes don’t line up with the current standings, with the two presumptive candidates receiving the least amounts in their parties, it certainly provides a strong indication of where the money’s going to concentrate in the general election.

As for which employees this money is coming from: CrowdPAC doesn’t have that information, but it can say that software engineers are the most likely to donate. That makes sense, since it’s probably the most common job title in the industry, but the findings also indicate strong showings from venture capitalists and developers. 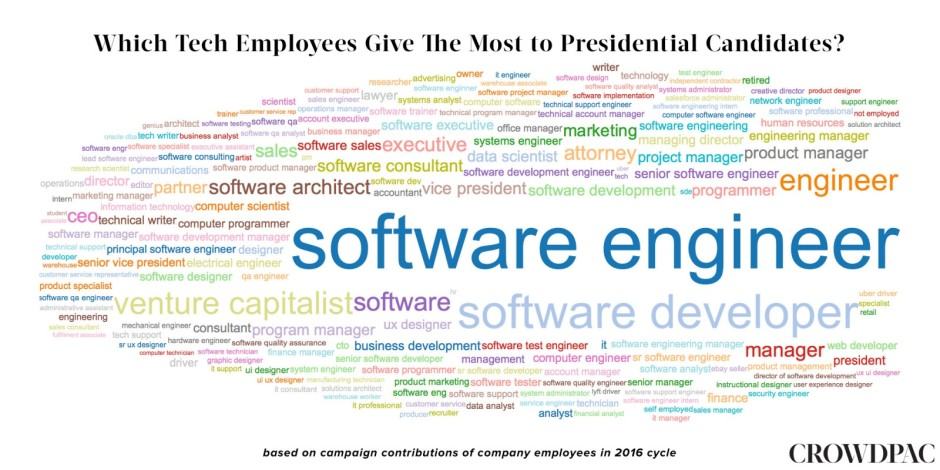 “CEO” is way smaller, but we also have way fewer of those. Source: CrowdPAC