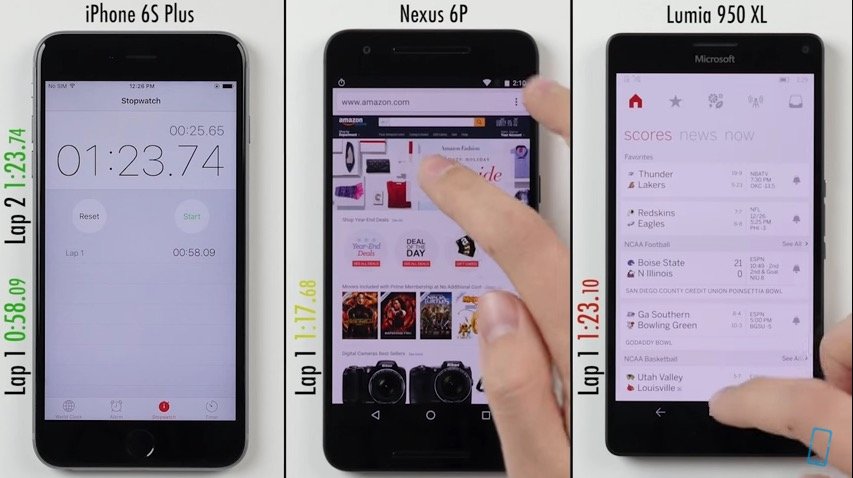 How long does it take an iPhone to lap a Nexus and a Lumia?

If all of the big boys’ flagship phones – the iPhone 6s Plus, the Google Nexus 6P, and Microsoft’s Lumia 950 XL – raced in NASCAR, which would be the fastest phone around? This speedtest video puts that concept to the test, making all three phones “run laps” to see which is the fastest.

The video, by YouTube channel Phonebuff, has one major conceit: the idea that a phone can run laps by opening a series of apps, one after another, and seeing how long it takes for them to load. So for PhoneBuff’s test, they loaded up all three devices with the same apps – Amazon, Temple Run 2, Netflix, and so on – and timed how long it took to cycle through all of the apps.

Of course, this sort of test isn’t very scientific. How fast apps load on a device isn’t just a matter of horsepower, but also about how developers have optimized their apps for the platform. They might look the same, but on a code level, the differences between, say, Netflix on iOS, Windows 10, and Android might as well make them totally different apps. So it’s not an apples to apples comparison. Still, this test supports a fact we’ve anecdotally in practice since September: if you want the fastest smartphone on the market, buy the latest iPhone.