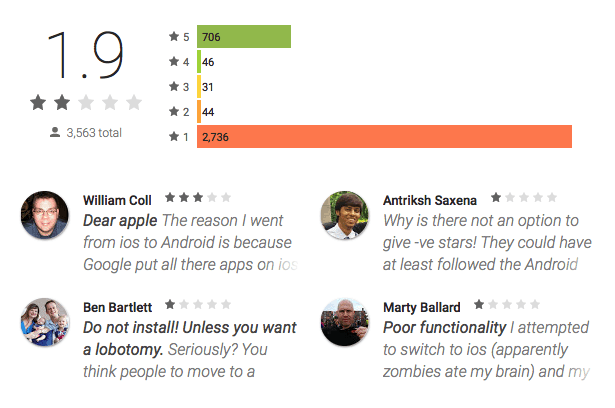 Android fans have made it clear that they are not happy that Apple’s first-ever app for Android is an undisguised attempt to get them to pack in their Samsung Galaxy S5 or Moto X for a shiny new iPhone 6s.

Since debuting yesterday in time for the launch of iOS 9, Android lovers have “awarded” Apple’s Move to iOS app a massive 2,736 1-star reviews in the Google Play Store, with reviews ranging from the angry to the… well, angrier.

Ben Bartlett thinks anyone installing the app is in need of “a lobotomy.” “Seriously?” he writes. “You think people to move to a restricted ecosystem that won’t even allow you to try apps before you buy?? Google why did you allow them to put this app here? Oh that’s right you promote innovation and don’t charge for it or place restrictions on it..”

Antriksh Saxena questions why there’s not the option to give negative stars, and says that Apple “could have at least followed the Android design patterns.” He ends his review by saying he hopes Move to iOS will get kicked out of the Play Store soon, and attaches the suffix #HatedIt in case you somehow missed that he wasn’t a fan of Apple.

To be fair to those upset by the app, the move is undoubtedly a bit of a cheeky one on Apple’s part. The aim might be to make it easy to migrate content automatically and securely from an Android device to an iOS one, but Cupertino was surely expecting some blow-back.

Then again, given the high number of ex-Android users already fleeing for the Cupertino hills, it’s clearly providing a service many would want. And, while the majority of reviews are negative, the 706 five-star reviews seems to back this up.