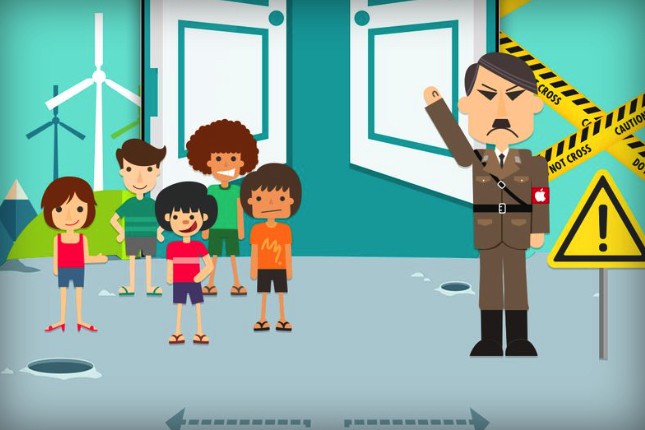 No. Just no. Photo: Jia Yuenting

Whether it’s arguing over market share vs. profit margins, or Google Now vs. Siri, the war between Android and iOS users can sometimes can a bit heated.

But up until today, no matter how anti-Apple the crowd, I’ve never heard anyone stoop to compare Tim Cook’s company to Adolf Hitler, the mass-murdering Nazi Party leader.

That’s all changed now, however, as a new ad from Chinese Internet video site service, Jia Yueting, is drawing on the massively offensive parallel to promote its new Android smartphone.

The ad depicts a cartoonish Hitler performing the Nazi salute, with his red armband showing the Apple logo instead of a swastika.

Accompanying text reads, “Under the arrogant regime of iOS domination that developers around the world love yet hate, we are always carefully asking, ‘is this kind of innovation okay?'” — apparently referring to complaints that Apple stifles creativity, has a closed ecosystem, or similar. The ad also refers to Apple as a “dusk empire,” suggesting that it is on its way out: a theory as backwards as anything else on the ad.

Ultimately, whatever the metaphor or implied message, it’s hugely offensive stuff, and goes way beyond the kind of jokey snipes you normally get between competing tech companies; crossing over into territory whereby I’d think Apple almost certainly has a justifiable libel case on its hands.