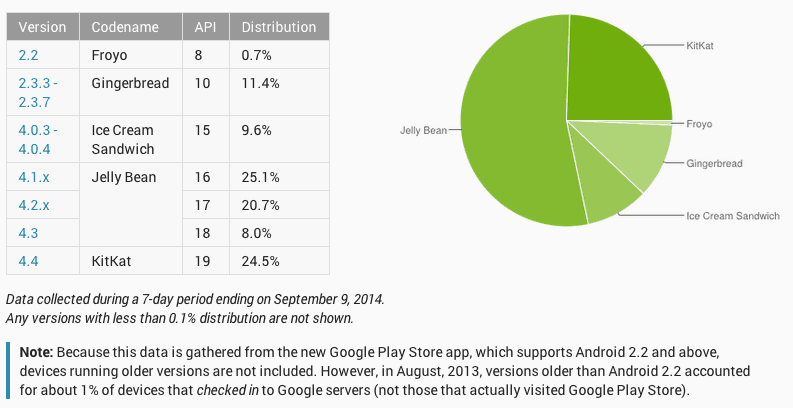 Google has just published the latest distribution figures for the Android operating system. The numbers were uploaded to the official Developer Dashboard blog and reveal a consistent growth in the amount of users running KitKat (4.4), whilst older versions of the OS continue on their long path towards extinction.

As is the norm, this data was collected by recording which operating systems customers were running when they accessed the Google Play Store over a 7-day period, which ended on Tuesday, September 9, 2014. This consequently gives Google an insight as to which version of Android is running on active devices all around the world. The team at Mountain View then break down this information and condense it into a pie chart for us comb through.

You’ll immediately notice that Cupcake, Donut, Eclair and Honeycomb are missing from the chart – this doesn’t mean they no longer exist, because they do. In actual fact, they’re absent because the earlier builds of the operating system can no longer access the updated version of the Play Store. However, Google did create a separate post suggesting that “versions older than Android 2.2 accounted for about 1% of the devices that checked in to Google servers.”

As you can see Froyo is almost at the point of being wiped out, holding just 0.7% of the Android market share for the third month running. Gingerbread has decreased dramatically, now measuring in at 2.2% under last month’s 13.6% of market distribution.

The only version of the operating system to face an increase this month is KitKat (4.4), which has seen an uprising of a whopping 3.6%, now weighing in at 24.5% of the total market share. Clearly, more people are purchasing Android 4.4-compatible smartphones and tablets, which is great as it means that the operating system can continue to expand, without leaving any users with outdated devices behind.

Do you want to find out more about these latest distribution figures? If so, simply head on over to the Android Developer Dashboard by clicking the source link below, where you will be presented with a handful of other graphs and charts, which breakdown this information in a multitude of different ways.