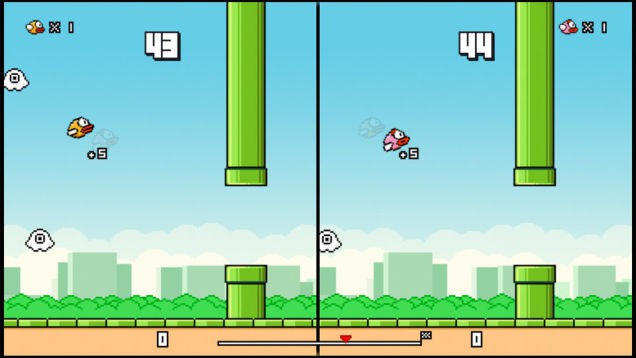 Dong Nguyen’s runaway viral hit mobile game, Flappy Bird, is back in a new form, but this time it’s only on Fire TV, Amazon’s answer to the Roku and Apple TV devices.

The new game, titled Flappy Birds: Family, is available now on the Amazon App Store, and seems to only work on the Fire TV as of this moment.

The game seems to have the same basic gameplay as the original (tap or click a button to flap the bird’s wings and avoid pipes), but adds ghosts as a new obstacle and a new multi-player feature.

“Flappy Birds now are on Amazon Fire TV,” says the app description, “with incredible new features: Person vs Person mode, more obstacles, more fun and still very hard. Enjoy playing the game at home (not breaking your TV) with your family and friends.”

Nguyen promised to bring his viral hit game back in August, and it looks like he has. The original game got huge, fast, prompting Nguyen to stop selling the app on iOS and Android back in February.

Why Flappy Birds Family is not available on iOS and ANdroid — or if it ever will be, is the current question. We’ve reached out to the famously media-shy young developer to see what the answer might be.

Until then, however, all you lucky Amazon Fire TV owners will get to play the latest Flaapy Bird game from the original creator of the gaming craze.