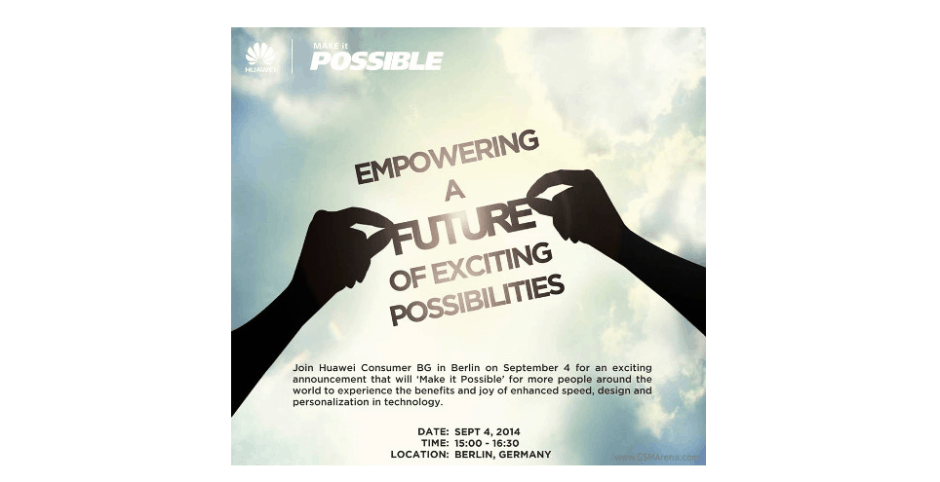 Earlier today, Huawei got into the IFA groove and started sending out invites to an event it’s holding in Berlin on Thursday, September 4 — the eve of the annual trade show for consumer electronics and household appliances.

The Chinese firm claims the revelations at this conference will ‘make it possible’ for more people around the world to experience the benefits of enhanced speed, design and personalization in technology,’ and that certainly sounds like a teaser for a flagship smartphone announcement, if ever I heard one.

Just last Tuesday, a report surfaced online suggesting that Huawei would unveil the much-anticipated Ascend Mate 3 this September — so it makes perfect sense to assume that this is the phone the company is planning to unveil and demo at this event.

If recent rumors and speculation are anything to go by, the Mate 3 is set to feature a 6-inch Full HD display with a resolution of 1080 x 1920 pixels, an octa-core Hisilicon Kirin 920 processor, 2GB of RAM, Adreno 305 graphics, a 13-megapixel rear-facing camera, a 5-megapixel front-facing camera and a 4,050 mAh removable battery.

For now though we’re just going to have to wait and see, your guess is as good as ours, but be sure to check back as we’ll be bringing you live coverage.