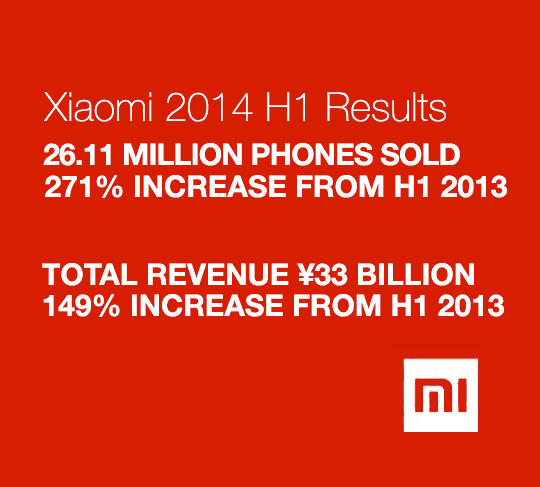 Hugo Barra, ex-member of the Android team at Google and now working for Xiaomi, has just announced that its new employer managed to ship about 26.1 millions phones globally in the first half of 2014. This is 3.7x times higher or an increase of 271% than what it shipped in the same period last year.

The company also managed to pull a revenue of USD 5.3 billion or ¥33 billion, up a whopping 149% from the 1st half of 2013. Hugo, however,did not reveal how much profit the company actually made.

Xiaomi might be an unheard OEM in the USA, but the company is a force to reckon with in the Chinese smartphone market. The company has consistently released impressive products at an extremely low price, which have always sold out within minutes of going on sale. In China — the biggest smartphone market of the world — the company has a stronger foothold than Apple, which has even led to the latter in revising its strategies from time to time.

The company recently expanded to Singapore and Malaysia and has been working hard to expand to another major smartphone market in Asia — India. With Xiaomi planning on expanding to other major Asian markets, its staggering growth is bound to continue for the time being.