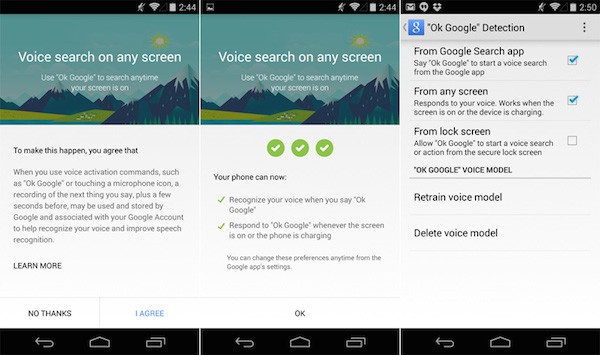 Google has started rolling out a hefty new update to the Google Search app for Android that brings with it a major new feature: OK Google hotword detection from any screen including your secure lockscreen.

Once you get the update and the setting is enabled on the server side from Google, head over to Google Now Settings -> Voice -> Ok Google Detection to enable the feature. You will need to train the voice model first by saying “OK Google” three times first, though.

Keep in mind that the feature needs to be enabled from Google’s side and simply sideloading the APK won’t enable it for your account. Also, it will only work for users who have their voice detection language set to English (US).

Apparently, some users for whom the feature has already been enabled, report that the voice detection also works while the device is off and is connected to a charger.

You can download the APK from here, in case you don’t want to wait for the update to show up on the Play Store, though it won’t necessarily enable the feature for you.