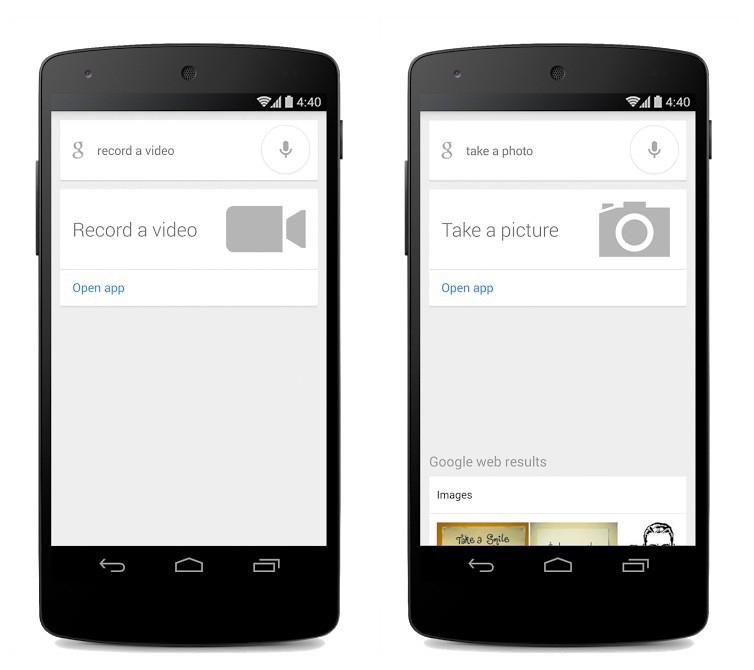 Google Search received a pretty nifty update in the Play Store yesterday, which brings some great new additions to Google Now, including the ability for users to take a photograph or record a video without even having to touch their smartphone or tablet. All they have to do is start the Search by saying ‘OK Google Now’ from their home screen on any KitKat device running the latest Google Now interface, then say ‘open the camera’.

They will then be taken to their stock Camera application (unless they choose otherwise), where they can take a photograph by saying one of following commands; ‘take a photo, take a picture, capture a photo’ or ‘capture a picture’. To record a video, simply say ‘take a video’, and when you’re ready to stop recording just say ‘stop recording’.

At this precise moment in time, this feature appears to be working on all Jelly Bean (4.1.-4.3) and KitKat (4.4-4.4.2) smartphones and tablets located in the United States and the United Kingdom. However, it’s expected that compatibility for the newly-implemented feature will expand to some European countries within the next two weeks.

The update has already been rolled out to all compatible devices via Google’s private Android servers, so there’s no need to manually download and install an update as it has already been done for you in the background.