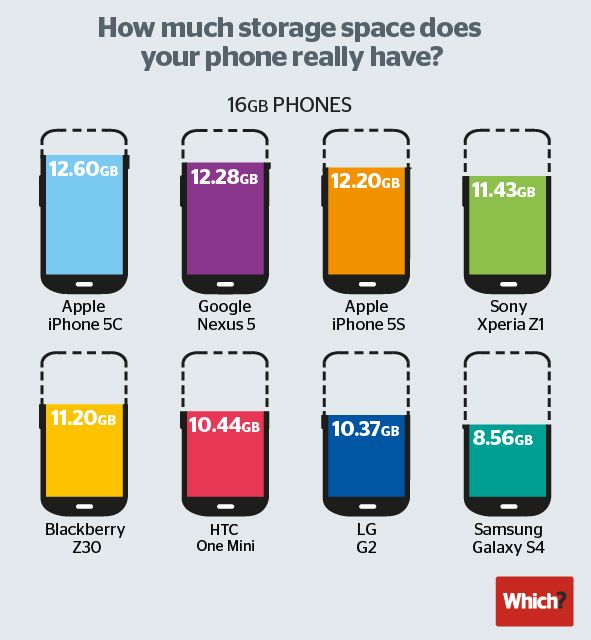 When you buy a 16GB smartphone, you don’t actually get 16GB of space to install apps, music and other media. No matter what smartphone you buy, the operating system needs to be installed into memory, and that takes up valuable gigabytes.

Still, some phones are better than others. As far as staying trim, the iPhone 5c is the best value for the money in its class, allowing users to install media to 12.60GB of the 16GB drive. The Google Nexus 5 comes in second place at 12.28GB.

The worst offender by far, though? The Samsung Galaxy S4. You won’t believe how little internal memory you get.

The comparison was conducted by U.K. tech site Which. Here’s what they found:

Apple’s more affordable (relatively) iPhone, the 5c, is the most generous of the 16GB phones we’re recently tested, giving you 12.6GB of memory (79%) to play with. Meanwhile Google’s new Nexus 5, which runs on the Android operating system like the S4,, is relatively bloatware free with 12.28GB (77%) of usable space. The iPhone 5s is in bronze position, providing 12.2GB (76%) of usable storage.

But there’s a caveat. While Apple’s devices give users access to most of the storage on the flash drive, they don’t come with expandable storage:

Before you rush out to buy any of the three phones just named, you should note that none of them have memory card slots. So while they may have the largest usable internal memories, you can’t add to them by using a cheap memory card. In contrast, you can massively boost the S4’s memory, adding an extra 64GB of storage for only around £40. To combat the S4′s storage issues, Samsung allows you to install apps directly to its memory card.

Expandable storage will never be as fast as internal storage, so it’s a trade-off. Ultimately, though, buying an Android phone will give you a lot more options for storing apps and games than an iPhone, no matter how much storage you initially get.