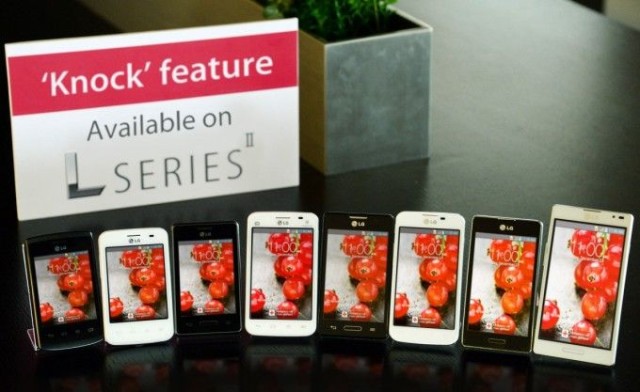 LG has today announced, that due to popular demand it has now decided to make its Knock feature, which debuted on the G2 back in August, a standard addition to all L Series II smartphones. For those unaware, this “convenient” function allows its users to lock and unlock their handsets by simply double tapping on the screen of their device.

According to an LG Electronics representative, this new feature will be pushed out to all Series II handsets presently on the market by way of a maintenance update, which has been scheduled to start rolling in January, 2014. Whereas, any new devices purchased in the New Year will come with this feature already onboard — so there will be no need to download and install the update.

The full press release can be seen below, and, in my opinion, it’s definitely worth a read:

SEOUL, Dec. 29, 2013 — LG Electronics (LG) announced that its popular Knock feature (formerly known as KnockON) will be included as a standard feature in the company’s key mobile devices in the future while its line of L Series II smartphones will receive Knock through a global Maintenance Release upgrade starting in January 2014.1

Knock was first introduced in LG G2 as a convenient way to turn the smartphone on and off by tapping twice on the display since the power button was located on the back of the phone. Then Knock was featured in a tablet for the first time with the LG G Pad 8.3 followed by the G Flex curved smartphone which also shared the rear button design of the G2. The reaction of audiences to this new feature was so positive that a version for LG’s best-selling L Series II was developed to offer the feature to as many customers as possible.

“Knock is distinctively an LG UX and a great example of what happens when you marry the latest in mobile technology with consumer-centric insights,” said Dr. Jong-seok Park, President and CEO of LG Electronics’ Mobile Communications Company, “No one ever thought that a power button needed to be improved until our engineers wondered why they couldn’t turn the entire screen into a power button.”