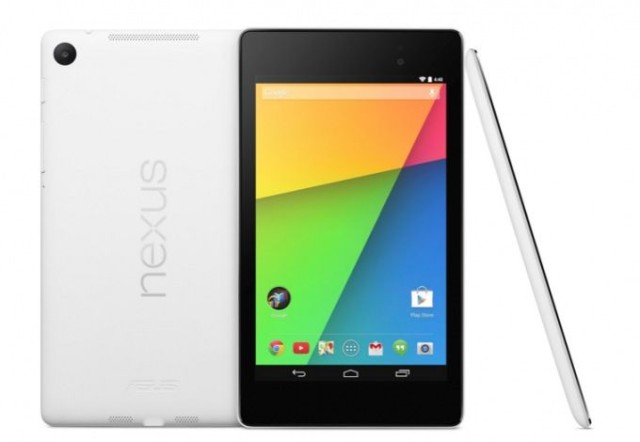 Yesterday, Google officially announced that its latest ASUS produced flagship tablet, the Nexus 7, is now available in white for residents in the United States. The team at Mountain View also added that the new color is on its way to Japan and the U.K.

The white Nexus 7 has exactly the same internals as the black version that was released back in July, and continues to pack a gorgeous 7-inch LED-backlit IPS LCD capacitive touchscreen on the market, a 1.5GHz Qualcomm Snapdragon S4 processor, an Adreno 320 GPU, 2GB of RAM, a 5-megapixel rear-facing camera, 16/32GB of internal storage, and a 3,950 mAh non-removable Li-Ion battery.

In addition, the device ships running Android 4.3 Jelly Bean, but you will be able upgrade the device to the latest build of Android 4.4 KitKat the first time you connect it to a Wi-Fi network. As is expected from any Android device, the slate comes pre-loaded with the full suite of Google apps, including: Gmail, Google Play, Google+, Hangouts and YouTube.

At present, the white variant of the Nexus 7 is only available in the 32GB Wi-Fi model, and not the 16GB or either of the LTE-enabled versions. However, we suspect that these devices, anodized in the new white color, will be available to purchase in the not-too-distant future.

If you live in the U.S. and like the sound of the white Nexus 7 — click the source link below to pick one up from the Google Play Store.