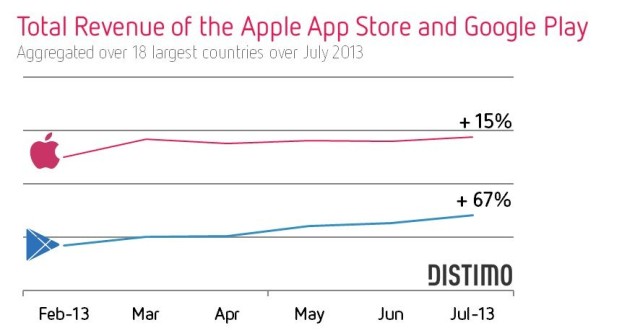 Google Play has made up a lot of ground on the App Store over the past couple months in terms of downloads and revenue, but the latest mobile marketplace report shows that Apple is still king of the castle when it comes to revenue.

According to app analytics firm Distimo, the App Store was still the larger market compared to Google Play in July, as Apple racked up nearly twice as much revenue as Google Play.

The report found Japan and South Korea are the main contributors for Google Play’s revenue, while the App Store gets most of its cash from users in the United States.

Even though it seems like Google may still be far behind Apple, the battle looks like it’s going to get a lot more even soon, as Google Play’s revenue has grown 67% over the last six months. The App Store grew 15% over that same period and only 3% of that growth occurred in July.