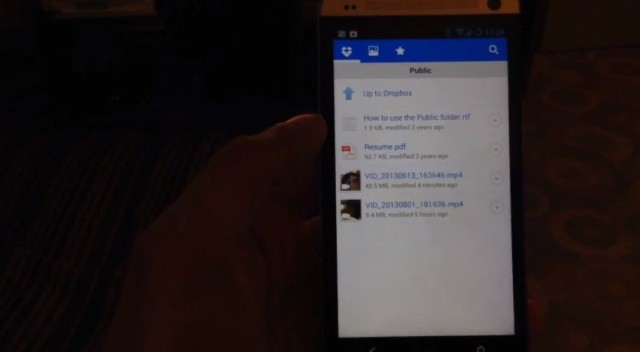 Last week, Koushik Dutta showed off his new phone-to-Chromecast video streaming app which will enable users to “cast” photos or videos stored locally on any Android device directly to an HD TV. And now, less than a week later he is showing off another one of his great inventions which will permit users to stream video, pictures or music from Dropbox to a Chromecast unit, in his brand new Dropbox-to-Chromecast app.

This app also fully utilizes the extremely wide range of customizable sharing options that are built within Android, allowing users to successfully push content from a third-party app on a smartphone running 4.3 Jelly Bean to a Chromecast unit.

The demonstration video entitled “Dropbox to Chromecast App” can be watched below:

In the YouTube video Dutta selects a short clip from his Dropbox library, he then clicks the share button and selects the option “Share to Chromecast,” and within 10 seconds the home movie is playing on his TV.

When an eager Google+ user posted this question to Koushik Dutta “Are you planning to keep them as separate apps?” He responded by saying:

Eventually, I’m going to release some open source, free, and paid Play apps. I haven’t decided on what each will be, what they will include, pricing, or anything like that.

I’m just playing with various ideas for the time being to gather my thoughts. Prototyping is the most fun part.

Click the source link below to view the full Google+ post where Dutta answers a few questions regarding his latest application.