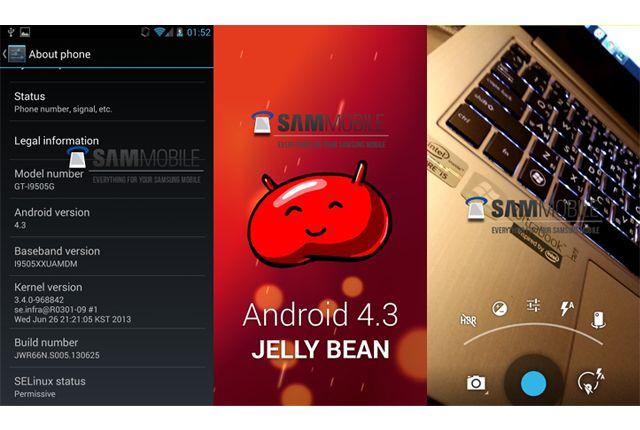 An Android 4.3 Jelly Bean ROM was leaked earlier this week and much to our surprise it wasn’t for a Nexus device. The leaked ROM was for the Samsung Galaxy S4 Google Edition, and was subsequently ported over to the standard GT-I9505 Galaxy S4.

There are very little user-facing changes in this build, however, since we don’t know how long it will be until the final build is released, we could very well see some more changes in the official Android 4.3 build when it comes out. Here’s what’s changed so far.

The Camera came with the “Google Edition” Galaxy S4 and HTC One and there aren’t too many changes in the user interface. However, there is a big change in the settings bar, which has gone from a full circle design to a semi-circle. In 4.3 Jelly Bean you will have the ability to use the volume buttons to take a picture.

Buried deep in the Advanced WiFi settings is a peculiar option which states “Scanning always available.” This means that your WiFi will always be on, allowing applications to constantly pull GPS information from a WiFi connection instead of the GPS chip. Many people consider this setting a battery eater, but in actual fact is saves you battery, as opposed to draining it as your device does not have to turn on the GPS chip. In any device GPS is the killer of battery juice, as it has to constantly refresh and connect to new satellites every second, or so. If you’re at all sceptical you can easily switch it off if you so desire.

Bluetooth LE (Low Energy) has also made its way into Android 4.3, listed in the System Info app under the title “android.hardware.bluetooth_le.” Bluetooth LE is exactly as it sounds, it’s a form of Bluetooth which uses considerably less power, in an effort to help users maintain their battery life.

There are also some new developer settings, some of which were discussed at Google I/O this year, as well as some rebranding’s of settings to make it easier for a user to find exactly what they’re looking for, i.e. “Cell Broadcast” has been changed to “Mobile Broadcasts.”

The Sun Beam live wallpaper, which was first seen in the “Google Play Edition” Galaxy S4 and HTC One, has been renamed to Phase Beam and will be available to all devices running 4.3 Jelly Bean. Finally, you will notice that the time in the notification bar is gone when you’re at the lock screen.

If you wish to view a full gallery of Android 4.3 screenshots taken on the “Google Edition” S4, provided by SamMobile, click here.

What do you think of the changes in Android 4.3, so far?