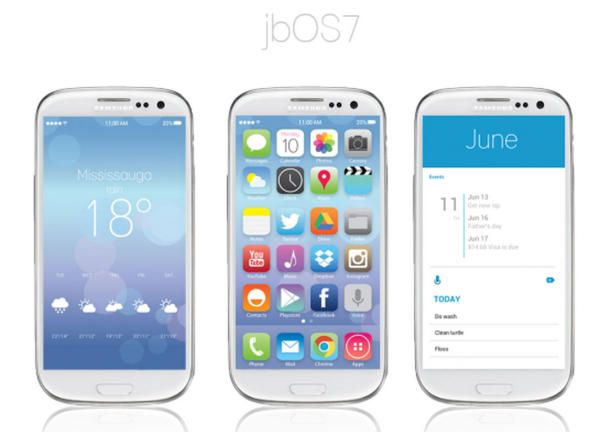 A new Android theme mimics the design of iOS 7, Apple’s newest mobile operating system. The theme is a combination of custom icons and the Nova Launcher home screen replacement for Android 4.0+.

Apple unveiled their next generation iOS 7 on June 10, but it won’t come to iPhone until the fall. Luckily if you have a Android phone it is released to you today, June 11! This is the first time Android has beat Apple to a release with jbOS 7 (jelly bean OS 7).

This is one homescreen with apps and two special additional screens that act as apps. When you click the calendar it takes you to the calendar screen. Same goes for the weather icon. It also has a very similar style iOS 7 lock screen to complete the whole look.

While you’re not going to get the exact iOS 7 experience with this theme by any stretch of the imagination, the similarities are pretty striking. The themer is claiming that all of this legal, but there have been some issues with Dropbox taking down certain download links in accordance with a DMCA takedown request.

You can take a look at the them yourself and install it at the source link below. Refer to the page’s comments for some more clarification from the themer.